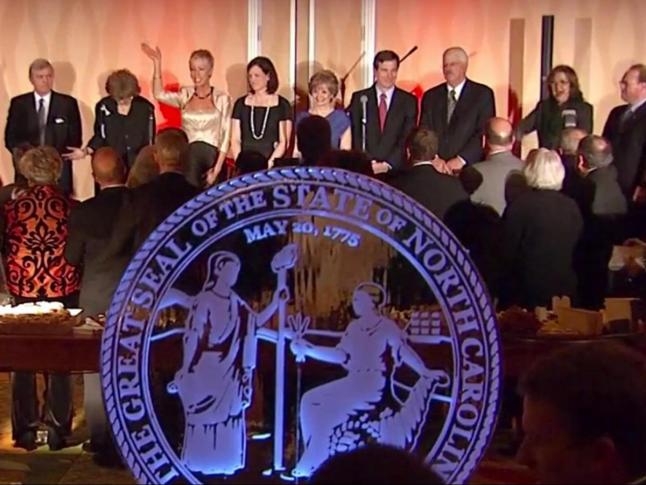 Raleigh, N.C. — Gov. Roy Cooper and several other members of the Council of State are taking their oaths of office early in small ceremonies this week, but that doesn’t mean the public inauguration ceremony on Saturday won’t go off as planned.

Volunteers with the Junior League of Raleigh are making sure that the events will have plenty of pomp – and raise plenty of money for charity.

“It is absolute organized chaos, but you know, it comes together magically in the end,” Junior League President Rebecca Ayers said Monday.

The money raised from the events, which include a Thursday night concert at Lincoln Theatre, a Friday night reception at Marbles Kids Museum and a Saturday night gala at North Carolina State University’s Reynolds Coliseum and Talley Student Union, goes to help with projects such as Communities in Schools of North Carolina, Backpack Buddies and the Boys & Girls Clubs of Wake County.

“This is a fundraiser that gives back to the community,” Ayers said. “It gives back to programs we have here that impact the lives of women and children in North Carolina. What better way to train volunteers and promote volunteerism that to host the event of the year?”

The contested results between Cooper and former Gov. Pat McCrory meant the Junior League had to send out invitations to the inauguration without the name of the governor on them. Astra Ball, who coordinates the 400 volunteers who are seeing to every detail of the inauguration, said that people need the festivities after such a bruising election.

“In today’s world, people are looking for something from the past, something that they can grab hold of and makes them feel good, makes them feel special for the night and tradition that’s deep-rooted in this community,” Ball said.

The events will feature food from 17 North Carolina chefs, craft beers by 10 brewers from across the state and music from North Carolina acts such as the Avett Brothers and Delta Rae.

“It’s going to come together just on time. We’re going to peak at the right moment,” Ayers said. “I think it’s going to be a great ball.”