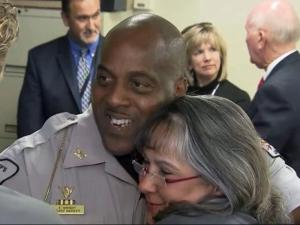 Fayetteville, N.C. — A new sheriff will be appointed in Cumberland County on Tuesday when county commissioners vote to replace the longtime lawman who retired at the end of 2016.

Sheriff Earl “Moose” Butler announced his retirement in November, and his last day was Dec. 31. The 79-year-old Butler served as the county’s sheriff for 22 years.

Butler recommended Chief Deputy Ennis Wright, a Fayetteville native and Army veteran, to fill the position for the rest of the term, which ends in 2018.

“I feel like it’s just time,” Butler said previously. “It’s proper for me to make the exit and leave it in the hands of a very capable person who has been working for me for about 18 years.”

The recommendation, though, doesn’t make Wright a lock for the job. Cumberland County commissioners wanted to hear other options before committing to Butler’s choice.

Commissioners solicited more applicants, and at least 10 others applied for the job. An applicant will need four of the seven commissioners’ votes to be appointed.

Wright, 57, has worked for the sheriff’s office for 20 years. If chosen, Wright would be the county’s first black sheriff.