As most of you know by now, a mild mid-week period appears set to give way to much colder weather later this week and through the weekend, and the question arises as to whether a system that can bring moisture and lift into play with that cold air might leave part or most of our area with some wintry precipitation.

We’re far enough in advance that specific outcomes are very difficult to pin down, and model projections for that time period have been varying notably in terms of potential impacts. In fact, yesterday the main operational models we use for that far in advance—the Global Forecast System (GFS) and European (ECMWF)—were not only different in timing or intensity, but had such different features and patterns leading into the weekend that it was difficult to believe they were initialized from the same global observations!

They have begun to show more similarity in general features today: The first image here is a 4-panel view of the GFS for Saturday morning at 7 a.m. from the Penn State University web site, and it shows an approaching broad upper level trough to our west in the top left panel, a surface front with low pressure forming over the Gulf of Mexico in the upper right, substantial moisture at mid-level (green area in the lower left) and very cold low level air in place (temperatures about 5,000 feet up, with the bold black line indicating 32 degrees) in the bottom right panel. 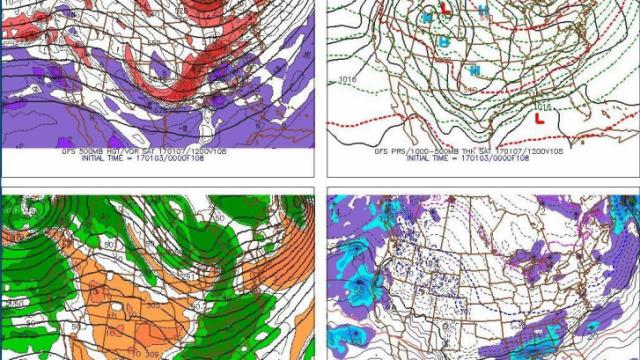 All of these are common features in producing a chance of snow for central NC. This is one of the many types of model products we use, this being a “deterministic” model—one run at the highest resolution available. We watch to see how these evolve as we draw closer to the day in question, and then look to see what trends may appear to develop.

Another tool we increasingly try to utilize are “ensemble” forecasts, in which the same model is run many different times with slight differences in the starting conditions or with different mathematical means of treating various physical processes within the model so that we gain a sense of how sensitive the final result is to those small changes.

It turns out that on average, even though the ensemble model “members” generally run at a lower resolution than the deterministic versions, the mean of the ensemble members tends to be more accurate at longer ranges (on average, though not in every instance) than the deterministic models. They also help us to see what level of uncertainty to express regarding the outcome.

The second image here is a “box and whisker” plot of temperature, precipitation, wind speed and cloud cover from the North American Ensemble Forecast System, or NAEFS, which combines 20 runs of the GFS model with 20 from the Canadian model. The yellow boxes encompass the middle 50 percent of solutions from all those runs, while the whiskers show the highest and lowest of all values. The dark bar shows the median value. 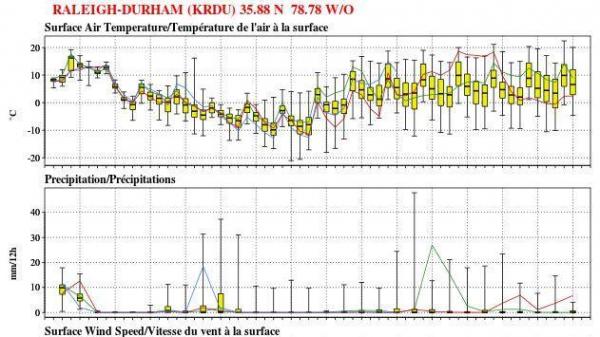 You can see how looking to Saturday the 7th, the general idea is for a run of cold air, extensive cloud cover and an increased chance of precipitation. On Saturday itself, you can see the highest precipitation whisker shows well over an inch of liquid, but the median value isn’t much above a trace or precipitation.

This leaves us with the idea that there are ways in which this system could come together to produce significant snowfall, but there are also many ways for it to turn out to be rather minor in nature.

While that graph shows results from NAEFS, it’s worth noting that we also check some similar ensemble charts from the ECMWF in which the model is run for a total 50 ensemble members. In the latest set of European runs available as I write this, the operational model (deterministic) was showing around 10-12 inches of snow for the Raleigh area, but the ensemble mean from the same starting point was about 8-tenths of an inch.

Those are just a couple of the many types of data displays and model output types that we consider as we approach a potential storm system like this. As we draw closer to the weekend, we’ll also begin having access to higher-resolution, shorter time span models, and to special multi-model ensembles that are tuned to dealing with winter storm predictions.

We’ll continue to refine projections for the potential storm from now into the weekend. Do continue to check in for updates in preparation for its passage.

American Express Cancelled My Account and it is Not Fair

Is Coast Processing or Litigation Practice Group a Scam?

Veterans United Overcharged the VA and I Want My Eligibility Back

Can My American Debts Be Collected In England?

If You Send Checks to Pay Bills – READ THIS NOW