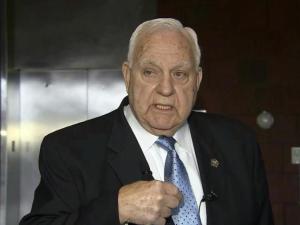 “I’ve been doing this for 23-and-a-half years,” said Wright, 57, who becomes Cumberland County’s first black sheriff. “I served my country, and I came back home to serve my community. I’m part of this community, and I’m looking forward to being a great sheriff.”

Butler, 79, who served as sheriff for 22 years, announced his retirement in November, and his last day was Saturday.

He recommended Wright, a Fayetteville native and Army veteran, to fill the position for the rest of the term, which ends in 2018. Wright, 57, has worked for the sheriff’s office for 20 years and has served as chief deputy for the last three years.

“I think he’s head and shoulders above the rest,” Butler said Tuesday. “No personal attack on anybody, but he’s there. He knows what’s going on, and this sheriff’s office will continue to operate like it has in the past.”

The recommendation, though, didn’t make Wright a lock for the job. Last month, Commissioner Jimmy Keefe had the county open the position to anyone who wanted to apply.

“I was disappointed in it, but I’ve talked with Jimmy, and I think he wanted to give it a total picture of giving everybody an opportunity to apply,” Butler said.