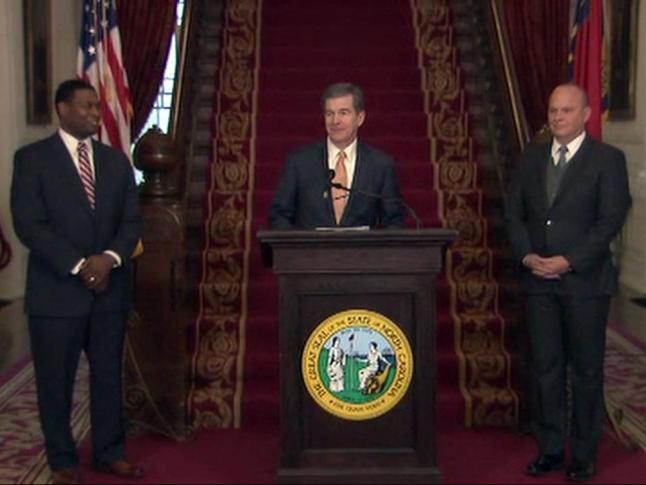 Raleigh, N.C. — Gov. Roy Cooper on Tuesday began assembling his cabinet, naming his choices to lead the departments of Transportation and Environmental Quality.

Jim Trogdon and Michael Regan still must be confirmed by the state Senate, according to a law passed during a special legislative session last month.

Trogdon spent more than two decades at the Department of Transportation, rising to chief deputy secretary before he moved to the private sector about three years ago.

“I believe he has both the management skills and the hands-on knowledge to help build and maintain our transportation needs with our eyes fixed firmly on the future of our state,” Cooper said in a news conference.

After getting back up to speed with DOT’s activities, Trogdon said, he plans to focus on addressing traffic congestion, linking people across the state with jobs and moving freight smoothly through North Carolina.

“It’s those things that are challenging all of the growing states in the United States, and North Carolina is one of the fastest-growing states,” he said.

Regan spent 10 years at the U.S. Environmental Protection Agency and a year in a management position with the Environmental Defense Fund.

“Michael cares deeply about clean air and water, not only that that can keep us healthy but can also boost our economy,” Cooper said.

Environmental groups immediately praised Cooper’s nomination of Regan, and the governor said he isn’t concerned about Regan’s background with EDF stalling his confirmation in the Republican-controlled Senate.

“Michael Regan has shown time and again that he’s been able to bring diverse groups together – people with different thoughts – about how to move the state forward,” he said.

Regan said he plans to tap the expertise and passion of career regulators at DEQ for suggestions and to improve transparency so everyone is working with the same information when devising solutions to environmental problems.