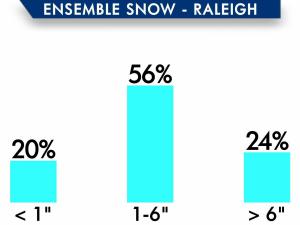 Raleigh, N.C. — Forecast models predicting snow around the Triangle differ in their predictions, but one thing’s for sure: Wednesday’s warmth won’t last long.

Most towns began the day with temperatures in the low to mid-50s, and those will warm through the day to reach 60 degrees in some areas.

But WRAL meteorologist Nate Johnson said not to get used to unseasonably-high temperatures.

“It’s the last time you’re going to see 60’s on the map for a while,” he said. “Great day to get outside before some freezing temperatures.”

“Some cooler and less humid air will be coming in behind this front late today and tonight, and we’ll feel that difference,” said WRAL meteorologist Mike Moss.

At least one forecast model shows the chance of snow on Friday night into Saturday morning is greatest to the south and east of Raleigh, Moss said. Not all models show the same thing, though.

“That’s one camp of models,” Moss said. “Not all of them are looking that way. In this particular case, (the snow) would tend to end as we went into later in the day.”

In an ensemble of computer model runs, 56 percent of the models showed Raleigh getting 1 to 6 inches of snow. The ensemble took into account 51 different runs, all given slightly different starting weather conditions, Moss said.

Leslie Logan Brown, owner of Logan’s One Stop Flower Shop said it is that time of year when plants need to be covered.

“Plants that are tender or recently planted in the ground will need extra protection because they haven’t had a chance to get established yet,” she said.

“You don’t want to use anything heavy. You want to use something light and breathable so they can still get air circulating under there,” Brown said.

The region has already seen plenty of rain since New Year’s Day, as the second storm front in as many days moved through central North Carolina Tuesday.

“I certainly hope we’re not conduct inauguration ceremonies from Emergency Management,” he said with a laugh.