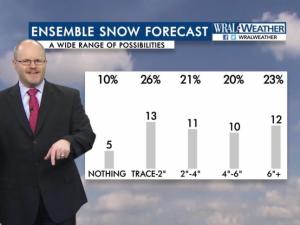 Wayne County Public Schools have canceled all afterschool activities and events on Friday as well as all athletic events and scheduled programs Saturday.

Forecast models predicting snow around the Triangle differ in their predictions, but one thing’s for sure: The cold is coming.

Most local communities experienced temperatures in the mid-50s to mid-60s during the day Wednesday.

“It’s the last time you’re going to see 60s on the map for a while,” WRAL meteorologist Nate Johnson said. “It was a great day to get outside before some freezing temperatures.”

“High pressure is building in from the plains states, and that high pressure is moving down, bringing much colder air from Canada, setting the stage for our wintry weather mix that is starting late Friday and into Friday night,” said WRAL meteorologist Mike Maze. “Overnight Wednesday, we should see mostly cloudy skies with around 30 overnight and 32 for the morning commute.”

At least one forecast model shows the chance of snow on Friday night into Saturday morning is greatest to the south and east of Raleigh, Maze said. Not all models show the same thing, though.

“What we could see fall would be either all snow or a wintering mix, but I think it will be all snow,” Maze said.

The North Carolina Department of Transportation plans to spread brine on the roads Thursday, late Friday and then all through Saturday, according to a spokesperson.

“I certainly hope we’re not conducting inauguration ceremonies from Emergency Management,” he said with a laugh.