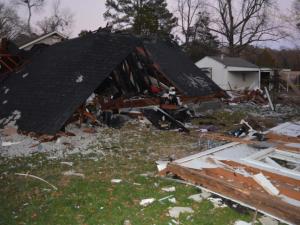 Halifax, N.C. — A Halifax County woman said she is lucky to be alive after a propane explosion obliterated her house.

Patterson Wilson owns the historic home in the 200 block of King Street.

Wilson said she reported smelling gas after workers left, but assumed it was from the re-igniting process. She then left her home. The home exploded at about 4:30 p.m.

Morgan Burnette, who witnessed the explosion said she felt the fround shake.

“I was in shock. It’s nothing I’ve ever experienced before,” she said. “I fell to the ground. I was screaming and crying.”

Fire Chief Ed Johnson said based on preliminary information, a gas leak under the home filled the house with propane and then ignited.

Fire crews from Halifax, Enfield and Weldon responded to the blast. It took firefighters about 25 minutes to control the flames.

Bob Edwards, who lives nearby, said she was in shocked.

“I’m just glad she wasn’t in the home, nobody was there,” Edwards.

Wilson is now staying at another home.

Additional information about the explosion is not immediately available.