Raleigh, N.C. — Cold air filtering into the Triangle on Thursday morning is setting the stage for the possibility of inches of snow in central and eastern North Carolina, but the exact amount is still uncertain.

Morning temperatures were down roughly 15 to 20 degrees from the same time on Wednesday—Raleigh began Thursday day at 35 degrees. Computer forecast models, though, still aren’t in agreement on how much snow will fall.

“Is there going to be enough snow for sledding? Well, it’s certainly possible,” said WRAL meteorologist Elizabeth Gardner. “But I don’t want to say it’s a done deal by any means.

“There’s still some computer models that are holding out that we may not see very much.”

The National Weather Service has issued a Winter Storm Watch for about three dozen counties, including Cumberland, Durham, Harnett and Wake counties. The alerts last through Saturday at 7 p.m.

Most of the snow, though, is concentrated to the east of Raleigh.

“Because it’s going to be a coastal system, folks in Roxboro, which tends to be the snowfall capital of our viewing area, may be the ones who just don’t see as much,” Gardner said. “The farther north and west you are, the less snow you may see compared to the rest of the viewing area.”

At least one model gives the most northeastern counties a 40 percent chance of seeing 8 inches of snow. 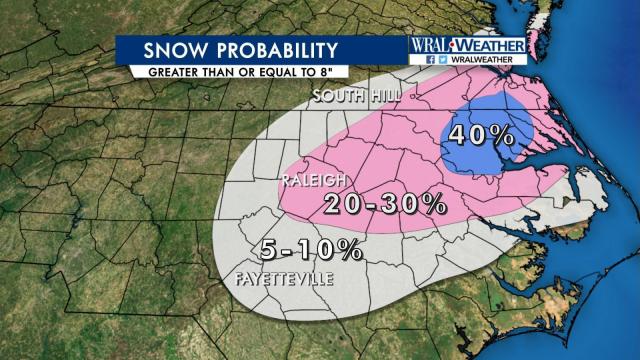 Though the computer models vary widely, Gardner said they are mostly trending in the same direction.