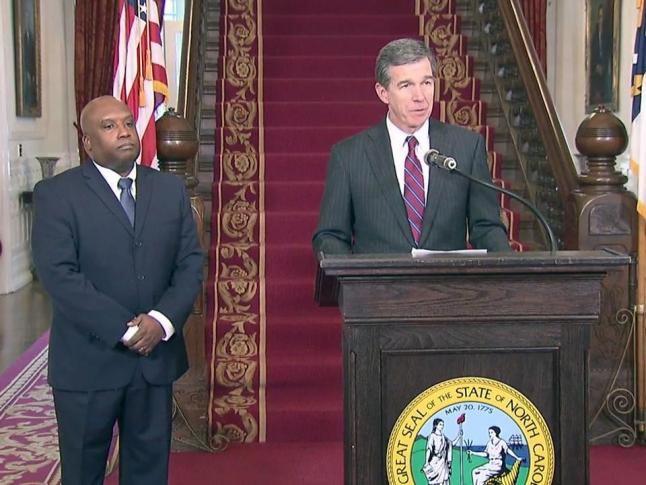 Raleigh, N.C. — Gov. Roy Cooper on Thursday nominated a former assistant director of the State Bureau of Investigation to lead the Department of Public Safety.

Eric Hooks, a Spring Lake native who has worked for the SBI for 27 years, becomes Cooper’s third cabinet nomination since he took office Sunday.

“Eric has done every kind of law enforcement, from drug trafficking enforcement to public corruption to Homeland Security critical issues, and he has done an excellent job both as a supervisor and as an on-the-ground agent,” Cooper said in a news conference.

Hooks was shifted to the position of special-agent-in-charge in 2014 when the SBI was moved from the Department of Justice to DPS. Before the move, he oversaw the agency’s Professional Standards Division; afterward, he headed the Threat Assessment and State Asset Investigations Unit and the Inspections and Compliance Unit.

He said he wants to work toward “bridging some gaps between law enforcement and the community.”

“We definitely have work to do to repair some of the trust issues that exist in some of our communities of color and law enforcement,” Cooper said.

The governor said, for example, that he and Hooks will review a law passed last year that requires a court order to publicly release footage from police body cameras and dashboard cameras.

“I’m obviously in favor of more disclosure,” Cooper said. “Those kinds of things can be helpful both to law enforcement and people in the community. So, what we’ll be looking at is as much transparency as possible and making sure that, among all the other issues we have, we work on all the ways we can build trust between law enforcement and our communities.”

All cabinet nominees must be approved by the state Senate under a law passed during a special legislative session last month.