Get home and wait: DOT will clear major routes first 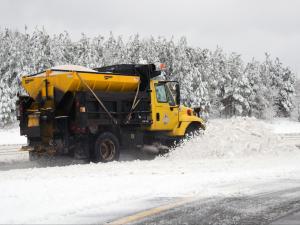 Raleigh, N.C. — With significant snow in the forecast, the North Carolina Department of Transportation says its priority is clearing off major roads and highways first. That can mean delays of days until secondary and neighborhood streets are passable.

Central North Carolina could see up to 7 inches of snow fall beginning Friday night and into Saturday. The National Weather Service issued winter weather advisories for most counties in central and eastern North Carolina through 7 p.m. Saturday.

Across the state, the NCDOT has 1,900 trucks equipped with plows and spreaders, 495 front-end loaders and backhoes, and 332 motor graders to help move the snow quickly.

Once the snow falls, crews will begin clearing major interstates and highways first, Shrader said, followed by secondary streets and then neighborhoods.

“This takes a long time,” Shrader said. “You see miles and miles of roads they have to clear before they can get to those secondary roads and neighborhood streets.

“The key here, if this is your first your first winter storm in North Carolina, you’re going to have to be patient. It’s going to take time to get those roads cleared.”