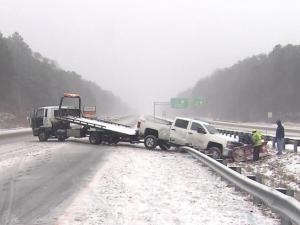 Raleigh, N.C. — As snow, freezing rain and sleet fell across central North Carolina, surfaces quickly became slick. Road conditions in the Triangle will only worsen overnight, due to plummeting temperatures.

Officials in police departments and other agencies from multiple counties in N.C. have cautioned the public of one thing all day: avoid driving at all costs. The warning will become even more important overnight, as temperatures plummet into the single digits, promising to freeze any precipitation that is leftover on the roads.

Although the snow in Raleigh is expected to stop within hours, sooner for counties to the west, temperatures dropping into the teens Saturday evening and the single digits by Sunday morning will ensure the wintry mix sticks.

“Temperatures are going to be so cold that it will be hard to get rid of this snow,” said Gardner. “Temperatures will dive down to 9 degrees at 8 a.m. on Sunday, and we could break a record Monday.”

Though all roads with wet spots will become slippery as temperatures drop, conditions are poorest in the areas that saw the most accumulation.

Even in Raleigh, which saw no more than 2 inches of snow, a second dusting of snow covered primary and secondary roads to the point where it is hard to see the lane dividers.

Although towns in Cumberland County and surrounding areas saw less snow than we did in the Triangle, some snow and rain did fall, which will likely freeze as temperatures fall.

All roads will be slick, posing danger to drivers and passengers, officials said.

Although roads still have the potential to be slick, workers with the Department of Transportation have been working to clear many main thoroughfares. Plows start with the largest, most-traveled roads first, like the four-lane interstates, then move to the smaller yet significant roads that take drivers to those main roads. Secondary roads and neighborhood streets follow.

,Road conditions will only worsen after the sun sets, due to plummeting temperatures and a light yet effective snow that added an additional blanket of accumulation to the roadways Saturday afternoon.