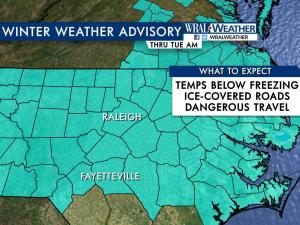 Raleigh, N.C. — It was cold overnight, and there won’t be much relief from the frigid temperatures even after the sun comes up on Sunday morning.

Temperatures will remain in the teens until after lunchtime, when things approach the low 20s, warming up just a bit. The high on Sunday will be 26 degrees, and meteorologists said the temperature won’t get above freezing all day.

Bundle up, especially when headed outside this morning, because it’s going to be cold and feel even colder. A Wind Chill Advisory is in effect for multiple counties, including Wake, Orange and Durham, until 12 p.m.

Although temperatures won’t do much to help clear the frozen roads across the state, the sun should provide somewhat of a warming factor. According to WRAL meteorologist Aimee Wilmoth, the sun should be out and shining bright by 8 a.m. on Sunday, providing some relief from the frigid temperatures.

It will get even colder overnight and into early Monday, though, when temperatures in the Triangle drop into the single digits, threatening to approach 0 degrees.

If temperatures do reach 0 degrees, a record low set in 1970 for this date will be broken.

After the area saw snow and freezing rain on Saturday, no additional precipitation is not expected Sunday, which will help workers as they begin to clear roads.

Monday will be much like Sunday, with bright sunny skies and temperatures remaining below freezing for most of the day. Rain is not expected to be an issue, and temperatures will likely remain in the single digits even at 8 a.m. before things start to warm up.

,It was cold overnight, and there won’t be much relief from the frigid temperatures even after the sun comes up on Sunday morning.