Officials: Watch For Icy Roads On Sunday, Most Highways Are Clear 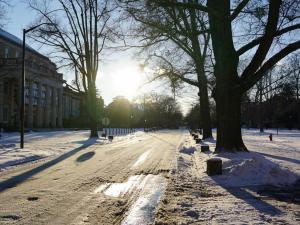 Raleigh, N.C. — Treacherous road conditions in the Triangle only worsened overnight due to plummeting temperatures that froze the ice and snow left on the streets after Saturday’s storm. The same could happen again on Sunday night when temperatures plunge into the single digits.

Most highways and interstates in the area are now clear, but many secondary roads are still covered in snow and ice that will continue to freeze overnight. Officials are reminding all motorists to stay off the roads, noting that even some seemingly-clear highways are full of slippery black ice.

Below-freezing temperatures will drop into the teens Sunday evening and remain there throughout the night, ensuring the wintry mix sticks around.

“Temperatures are going to be so cold that it will be hard to get rid of this snow,” said WRAL meteorologist Elizabeth Gardner. Temperatures will drop into the single digits overnight, making conditions even colder before things start warming up on Tuesday.

The lanes on either side of I-40 at Aviation Parkway are now dry and clear, as is the Durham Freeway, but officials still want drivers to watch for black ice.

Some major interstates aren’t as clear, including US-264 at US-64 business, so drivers still have the potential to run into trouble while traveling on Sunday.

Most secondary streets have not been cleared at this time, and they may not be clear until Tuesday, officials said. Workers will be treating the roads all day Sunday. On New Bern Avenue at Trawick Road for example, roads are still covered in ice. The issue in most of the viewing area is getting to the highways safely, officials said.

Deputies in Durham reported that Interstate 85, Highway 147, and U.S. 70 are passable while Highway 98 is still affected by snow and ice.

Even in Raleigh, which saw no more than 2 inches of snow, a second dusting of snow covers secondary roads to the point where it is hard to see the lane dividers. At this point, those roads leading to the highway are of the main concern, as are neighborhood streets.

Officials said about 40 wrecks occurred overnight statewide due to treacherous road conditions, but no fatalities or serious injuries have been reported.

Officials estimate that about 12,000 people in North Carolina were without power at 8:30 a.m. Sunday morning. Of those, Durham, Franklin, Gaston and Wake counties are the most affected. Since then, the number has decreased by more than half. At 10:45 a.m., officials announced that only 5,919 are without power.

The Town of Rolesville and the Town of Wake Forest have closed Rogers Road between Heritage Gates Drive to Hobblebush Way, according to the town manager. Barricades have been put in place because of the road’s icy and slippery conditions.