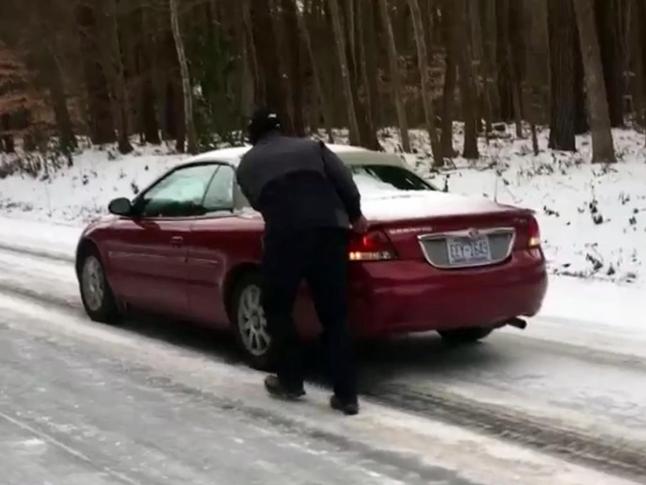 Raleigh, N.C. — Drivers across the Triangle were slip, sliding away Monday as many roads remained coated in ice after a snowy and bitterly cold weekend.

State Highway Patrol troopers have responded to more than 3,600 calls for service since midnight Friday, authorities said. About one-third were collisions, and many of the rest were for vehicles that had slid off roads.

More than 100 people called AAA Carolinas for service by 7 a.m. Monday, said to Tiffany Wright of AAA, and tow truck driver Mike Wetherington said he and his wrecker had to go from one call to the next Monday to rescue stranded drivers.

“Most of them are going too fast, not slowing down when they see ice, locking the brakes up,” Wetherington said. “(The car) basically slides, turns them around, puts them in a ditch.”

Chris Moscariello wound up in a ditch in front of his house on Old Stage Road after his plumbing van slid down his driveway.

“I just slid right into the ditch. Hit my mailbox and everything else,” Moscariello said. “It made me mad.”

Although rain, sleet and snow might not stop the mail from getting through, postman Pete Valvini did get sidetracked by an icy parking lot.

“I just caught a nice piece of ice without chains on my tires,” Valvini said. “I just couldn’t stop. Thank God the curb broke my slide. I saw those two cars right there, and I thought, ‘Oh, please don’t let me hit those cars.'”

Brian Shields didn’t even bother trying to venture out of his ice-packed driveway along Mount Vernon Church Road.

“The streets are all ice anyway too, so where are you going to go? Off the side of the road?” Shields said with a laugh.

That was the case for several drivers who abandoned vehicles along the side of the road.

“I made it about halfway up this hill and then started sliding backwards,” John Grace said.

Grace said he and his family then decided to walk to the nearest store after running out of snow-day essentials such as bread, milk and eggs.

“I’ve always been able to get out of our neighborhood,” Grace said. “I have to start work early in the morning and have to be the first one there to let other people know if they’re coming to work. So, yeah, not a good feeling.”

The situation was the same in Durham, where hilly neighborhoods created no-win situations for drivers.

“My dad, when he left, he went up the hill and slid all the way back down,” Latarsha Stevons said. “I have to go to work. I either have to find a ride or walk, basically.”

Stevons and her neighbors on Oak Ridge Boulevard said they haven’t seen a snow plow come near their street.

“They’re going to get the major streets first, but don’t forget about us. We’ve still got to get out and go to work,” Stevons said.

“It does concern me. I would like to see them come through and scrape the roads,” Joanne Terry said.

In Bahama in northern Durham County, Karen Terry and Carl Priddy said they were content with waiting for the plows – or for Mother Nature to clear the roads.

The couple hasn’t been out since Friday, she said, although they’ve seen what has happened to others who have tried.

“We saw the lights go by the window, and we’re like, ‘Yep, somebody’s in the ditch,” she said.