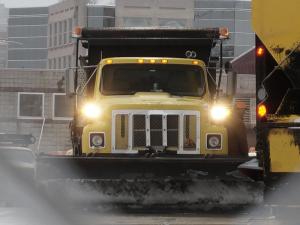 Raleigh, N.C. — Despite temperatures warming above freezing on Tuesday, icy conditions are still making for treacherous travel on secondary roads.

Many major roads and highways, such as Interstate 40, were dry and passable early in the morning. But side roads around the Triangle still presented a problem for early commuters.

One of the trouble spots, Mineral Springs Road in Durham County, was a sheet of ice and compacted snow pitted by the previous days’ tire tracks. To make matters worse, some of what melted on Monday re-froze on roads overnight.

“There’s been no road work done on many of these secondary roads,” said WRAL reporter Mikaya Thurmond.

State Highway Patrol troopers have responded to more than 3,600 calls for service since midnight Friday, authorities said. About one-third were collisions, and many of the rest were for vehicles that had slid off roads.

More than 100 people called AAA Carolinas for service by 7 a.m. Monday, said to Tiffany Wright of AAA, and tow truck driver Mike Wetherington said he and his wrecker had to go from one call to the next Monday to rescue stranded drivers.

“Most of them are going too fast, not slowing down when they see ice, locking the brakes up,” Wetherington said. “(The car) basically slides, turns them around, puts them in a ditch.”