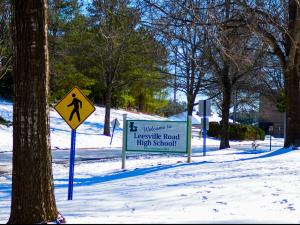 Schools in the Wake County Public School System remained closed Tuesday, and spokeswoman Lisa Luten said leaders would be meeting on the hour to monitor conditions before making a decision about Wednesday classes.

“It’s too early to predict Wednesday,” she said.

Wake Forest, in the northern part of the county-wide school system, is the biggest problem, Luten said, but any decision will likely be all-or-nothing.

“In Wake County, many students attend a school outside their base school/neighborhood school. This means students might be crossing towns to attend a magnet school or a school they transferred to for other reason,” Luten said. “The same is true for teachers. Many teachers and staff work in schools that aren’t near their homes but still in Wake County.”

Principals and custodians checked on school buildings Monday to make sure the heat was working well enough to welcome back students and teachers, Luten said. They would again be on the properties Tuesday and would factor into the decision on whether another snow day is in the offing for Wednesday.

Durham, Johnston and Orange counties also canceled classes on Tuesday, while schools in Cumberland County operated on a two-hour delay.

Warmer weather on Tuesday should hasten the meltdown. Temperatures should be above freezing by noon on the way to a forecast 70 degrees on Friday.

“We should see much more melting of the ice and snow during Tuesday afternoon, and with lows overnight staying well above freezing, thawing will continue,” WRAL meteorologist Nate Johnson said.

Wake County posted a detailed list of make-up days based on the various school calendars on the school system website. Students on traditional calendars will make up Monday, Jan. 9, on Friday, Jan. 27, and Tuesday, Jan. 10, on Monday, Feb. 20.

Students on a traditional calendar in Durham will make up Monday on Jan. 23 and Tuesday on March 27. Details for other calendar schedules are also posted online.

For a full list of public and private school closures and delays, check out WRAL.com’s closings page.