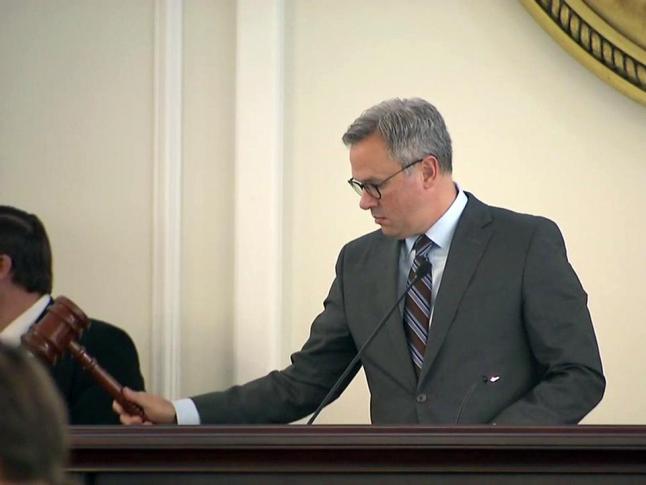 “May we enjoy a collegial and productive session,” Sen. Phil Berger, R-Rockingham, said to senators after being elected to another term as president pro tem of the chamber.

Lawmakers plan to focus on raising teacher salaries to an average of $55,000 a year over the next two years, while limiting government spending, cutting regulations and continuing to sock away money in the state reserve fund, Berger said.

“We will not, under any circumstances, return to the failed tax-and-spend policies of the past,” he said.

In the House, Rep. Tim Moore, R-Cleveland, was tapped to serve a second term as speaker.

Although he didn’t get into specifics, Moore named continuing the state’s economic growth and funding education as key priorities for the coming term.

“I’m proud our state is on solid financial footing thanks, frankly, in large part, to the hard work of this House,” he said. “Thousands – thousands – of new jobs are being created in North Carolina every month with very broad growth among small businesses and large corporations alike.”

“We will not always agree, but let us disagree respectfully and with kindness,” he said.

Berger likewise urged his colleagues to work hard for each other and their constituents.

“The lion’s share of what we work on in these halls is not controversial,” he said. “No matter what our political party, we’re all here because we want to help our state thrive and for our citizens to reach their full potential. It’s disheartening that some only want to focus on what divides us – what draws the most campaign contributions, what attracts the most free press attention.”

The General Assembly has been very divided on some hot-button issues in recent years, however. In a special session a few days before Christmas, for example, they struggled and ultimately failed to repeal the state’s controversial law limiting LGBT rights, prompting Berger and new Democratic Gov. Roy Cooper to blame each other.

“As we consider the task ahead at the start of this session, let us remember all that we can accomplish when we work together,” Berger said.

The House tapped Rep. Sarah Stevens, R-Surry, to be speaker pro tem. Although the job is technically the No. 2 job in the chamber, the House majority leader and other members wield more influence.

Meanwhile, the Senate named Sen. Louis Pate, R-Wayne, to be Berger’s deputy. As in the House, the majority leader and the rules chairman have more power than the deputy pro tem.