With Temps Above Freezing, Classes Are On For Thursday 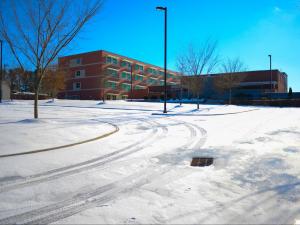 Raleigh, N.C. — With temperatures topping out in the mid 50s on Wednesday, school systems across the area are making the call: classes are on for Thursday.

Students and parents agree they are eager to head back to school. Students said the snow days were fun at first, but high schoolers need help to prepare for next week’s exams.

“We have to try to figure out the stuff on our own now and learn it so we can prepare for finals,” said Emma Dalbo, a senior at Green Hope High School in Cary. “Since they aren’t pushing back finals, the time is all really compressed, and it is honestly really stressing me out.”

Thursday, Jan. 12 is a normal #chccs school day & there is NO delayed opening. Be careful & we’ll see you at your regular time! pic.twitter.com/JzfXTlOvda

Take off those toboggans and put on your thinking caps. Looking like all systems go for a full school day tomorrow. ☀️

Ellen Dalbo believes three days was too long for her kids to be out of class.

“I was shocked coming from up north that schools would be closed when it’s an inch and a half of snow,” she said. “I’m really worried that they’re not going to be prepared. This is my children’s junior year, and it’s really really important for college grades.”

Warmer temperatures on Tuesday and Wednesday helped to clear school parking lots, making it possible for students to head back to class.

As far as clearing secondary roads in Wake County, officials with the Department of Transportation said they were hampered by freezing temperatures earlier in the week.

“We had to wait each morning after it got really chilly for it to get warmer so that salt could kick in, sunshine could kick in a little because we can’t plow ice. The plow goes along ice like a figure skater’s skate,” said Steve Abbott, spokesman for the North Carolina Department of Transportation.

“This has happened year after year. We need to figure out a way to deal with it,” she said.

Wake County posted a detailed list of make-up days based on the various school calendars on the school system website. Students on traditional calendars will make up Monday, Jan. 9, on Friday, Jan. 27, Tuesday, Jan. 10, on Monday, Feb. 20, and Wednesday, Jan. 11, on Friday, Mar. 31.

Students on a traditional calendar in Durham will make up Monday on Jan. 23, Tuesday on March 27 and Wednesday on April 17. Details for other calendar schedules are also posted online.