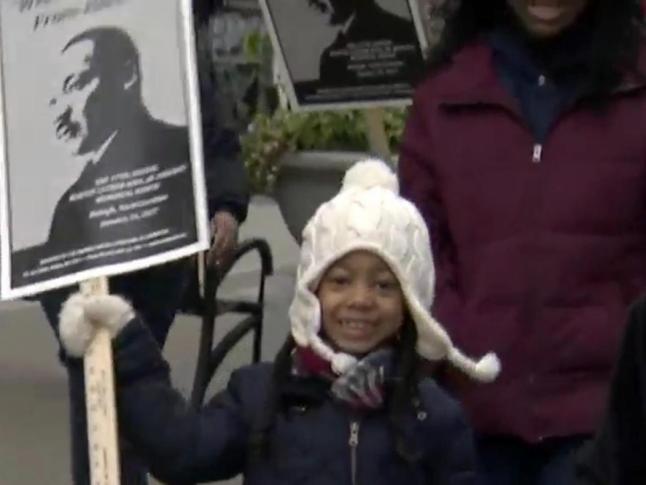 Raleigh, N.C. — The political events of the past year were on the minds of many who took part in the Martin Luther King Jr. Day march through downtown Raleigh on Monday.

With the eight-year term of President Barack Obama, the nation’s first black president, ending Friday as President-elect Donald Trump takes office, many marchers expressed concern for what the coming year might bring. The rift the election opened in this country makes King’s call to come together as important as it’s ever been, the marchers said.

“As you can tell what’s happened … from our most current election, racism is very much still alive,” said Leah Holden, who was among the estimated 1,000 people who marched around the State Capitol and down Fayetteville Street to the Duke Center for the Performing Arts, where children’s choirs, church groups and others later staged a musical tribute to King and his legacy.

“It makes these moments even more special for black people, white people, young and old to come together and celebrate human rights, rights for everybody, equal opportunity,” Holden said. “That’s what makes these so much more important now.”

The bitter tone of the election and the divisive, racially charged rhetoric that emerged from it made an impression on Charlie Hobbs, who said he had to participate in the march to show his support for the black community.

“I think it’s important right now because our country is facing challenges that we haven’t faced before, and I think a lot of people are concerned about what’s going on,” Hobbs said.

Marcher Raymond Cox agreed that King’s message is more important than ever – for the entire country, not just the black community.

“Civil rights is not about black rights. It’s about American rights,” Cox said. “We’re better than what we were, but we have a long way to go. So, we need these things. We need to continue to come together so that we can fight for these common goals because the work is not over, because the struggle is not over.”

,The political events of the past year were on the minds of many who took part in the Martin Luther King Jr. Day march through downtown Raleigh on Monday.