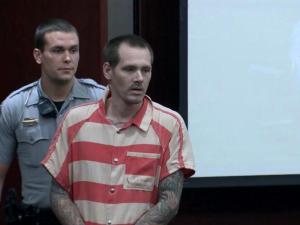 Raleigh, N.C. — A Cary man pleaded guilty Tuesday in the 2014 death of Wendy Jean Johnson, a night nurse, whom he shot on Aug. 22, 2014, in the parking lot of Hyde Park Apartments.

Daniel Scott Remington, 38, of Gooseneck Drive, will serve life in prison without parole for her murder. His plea allowed him to avoid the death penalty in the case.

Johnson, 58, of Sanford, had been in Cary for her job and, according to a search warrant in the case, was getting out of her car when Remington allegedly approached her and shot her after she wouldn’t give him her purse.

She was taken to Duke University Hospital in Durham, where she was pronounced dead.

In court on Tuesday, Johnson’s daughter, Lora Jackson, described her mother as a Christian, and someone who was always giving to others.

“She was loved by all those who had the privilege of knowing her,” Jackson said.

Jackson said her mother moved to North Carolina to help raise her daughter while her husband was deployed in Afghanistan. During the day, Johnson would watch the baby, and at night worked as a night nurse helping patients who needed in-home care.

She said her mother went on multiple mission trips and helped care for children overseas. Jackson said her ultimate dream was to run an orphanage in another country.

“She was a mother, a grandmother, an aunt, she was my best friend, my mentor, my spiritual guide. She was a missionary,” Jackson said. “She was tenacious. She never gave up.”

Jackson is now caring for her adopted brother Ritchie, whom Johnson adopted from Jamaica at a young age.

“My mom was the glue that held us all together,” Jackson said. “It doesn’t get any easier. It just gets different. You learn to live with the pain.

“That such a kind, compassionate, selfless, loving, extraordinary, vibrant life was taken in such a violent and senseless way, that’s something I will never get over, or understand.”

Remington decided not to address the court.

,A Cary man pleaded guilty Tuesday in the 2014 death of Wendy Jean Johnson, a night nurse, whom he shot on Aug. 22, 2014, in the parking lot of Hyde Park Apartments