At 11 AM today a bunch of nicely dressed people, including the North Carolina Attorney General, gathered in the Wake Forest Town Hall to make some public comments about the kidnapping and recovery of Wake Forest resident Frank Janssen which we covered here.

According to the talking heads today, Janssen has a daughter who is an Assistant District Attorney and Frank was abducted and taken to an apartment in Atlanta where he was held in a section 8 subsidized apartment for ransom in hopes of seeking some benefit for a man she had convicted.

Last night at 11:55 PM the FBI swooped in and snatched Frank back.

According to the criminal complaints filed by the U.S. Attorney in Raleigh, the perps were Jenna Paulin Martin, Tiana Maynard, (“Tiana Brooks”), Jevante Price, (“Flame”), Michael Montreal Gooden (“Hot”), and Clifton James Roberts. It appears Flame and Hot were a perfect match. Maybe one of the others was known as Wick?

So according to government documents that group named above conspired to kidnap Wake Forest resident Frank Janssen. They carried out the plan by sending a heavy-set white female to Janssen’s door. Ah yes, the old send in the fat white chick trick. Janssen was then assaulted and tazed and removed from his home where he was put into a vehicle. He was hauled down to Atlanta.

On Monday April 7, 2014 Frank’s wife started getting text messages that indicated Janssen had been kidnapped. They also said Janssen was in the trunk of a car and headed to California.

The text messages said if law enforcement was contacted, “we will send [Mr. Janssen] back to you in 6 boxes and every chance we get we will take someone in your family to Italy and torture them and kill them…we will do drive by and gun down anybody,” and “throw a grenade in your window.”

That’s very frightening stuff but what did Italy ever do to those kidnappers? Italy is a lovely place.

The messages were sent to try to get some help for a Polk Correctional Institution inmate held in Butner. Mr. Kelvin Melton had been previously prosecuted by Frank Janssen’s daughter and was serving a sentence of life without parole.

Melton appears to have been one of a group that had previously conspired to kill a man in 2011 who wound up being shot in the head here in the Raleigh area. Melton is said to be from Baltimore, Maryland.

Melton’s had a rough patch while in Butner. While incarcerated he’s had a series of infractions including, unauthorized tobacco use, lock tampering, and weapon possession.

Christie Janssen later received a text message with a picture of Frank tied up and seated in a chair. The message said “Tomorrow we call you again an if you can not tell me where my things are at tomorrow i will start torching [Mr. Janssen]…if we find out the police seen this we kill both people now and go for you family.” There is no clarity who the other person might be. Things? Second person?

The telephone number that sent that message had also been used to exchange calls with the prison area at Butner. The user of that phone also placed 99 calls to Melton’s daughter. The phone was identified as belong to Melton.

Things really got scary when the FBI got a wiretap and started listening to the phone calls related to this mess. Male voices were saying things like:

Authorities attempted to enter Melton’s cell at Butner to look for the phone. Melton tried to bar the cell door and smashed the phone. In the end it didn’t work out well for him.

At 10:40 PM last night a call was intercepted between a man and a woman. The male voice said, “FBI helicopter are outside. We gotta get rid of holmes.” The female said, “I’m not going anywhere, FBI are all over.”

Being the brainiacs that they were, Tiana wound up having her children taken into protective custody when law enforcement searched her home that was connected with one of the calling numbers and found the kids alone. Tiana and others then drove to the police station to collect her kids and arrived in a blue Chevy Tahoe. Inside the Tahoe police spotted picks, a shovel, and a .45 caliber pistol.

Thankfully, law enforcement resources from all over worked closely with the Wake Forest Police Department and recovered the missing Janssen.

Glad that’s all over now and he’s safe. 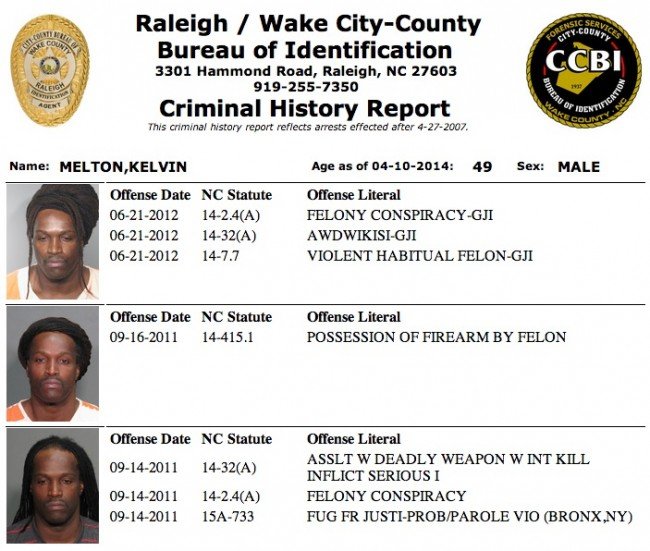