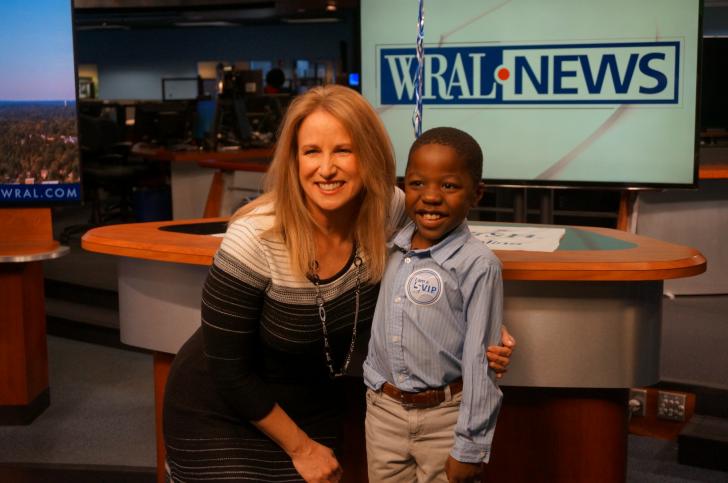 Raleigh, N.C. — WRAL welcomed 7-year-old Duke Children’s Hospital patient Mac Hogstrom and his family to the WRAL station on Wednesday, along with his wish team from Make-A-Wish Eastern North Carolina.

Mac’s wish to ride in a helicopter was revealed, and he was ecstatic to learn he will be riding in Sky 5 on Jan. 23.

“This is a great day! It’s like my birthday!” Mac said. “How many more days?”

Mac, whose eighth birthday does fall the day before his helicopter ride, also opened a few gifts from Make-A-Wish gifts, including a Lego helicopter, cupcakes and a Duke Life Flight teddy bear and pin.

“Make-a-Wish provides this wonderful service to these kids who have missed out on so much of their childhoods and they’ve had so many negative experiences,” Mac’s mother, Belinda Hogstrom said. “Make-A-Wish steps in and gives them something amazing for them to look forward to that’s uniquely tailored to them”

Mac also had a private tour of the station by anchor Debra Morgan, where he explored the control room, master control, the weather center, the newsroom, green screen and the anchor set.

“It’s amazing to see how the community comes together to support our kids,” said Make-A-Wish Eastern North Carolina President and CEO Kristen Johnson. “We grant around 200 wishes each year, and it’s so humbling to see how others get involved. We would never be able to do this without the support.”

Mac will ride in Sky 5 with his parents and WRAL pilot Steve Wiley.

WRAL is on its third helicopter, and it’s the biggest and fastest Sky 5 yet, flying around 150 miles per hour. A high-definition camera on board captures a perfect picture 2,000 feet away.

Pilot Steve Wiley said he can be anywhere in the Triangle within seven minutes. In general, the helicopter can reach any location in about half the time it takes to drive.

“I think the smile that you’ve seen on Mac’s face today really sums it all up,” said Laura Jasmine, Mac’s wish coordinator. “Just inspiring that joy for kids and for families who sometimes haven’t had a lot of joy in their lives because of the challenges that they’ve faced. They’ve had a lot of scary things and painful things that they’ve had to go through.”

“Make-A-Wish really fills a gap of experience and fun where it gives the child the experience to realize something is exceptional when they’ve been denied a lot of the ordinary,” said Mac’s dad, Matt Hogstrom.

As he was leaving the station, Mac caught a glimpse of Sky 5 landing on WRAL’s roof.

Mac’s friendly spirit was loved by everyone in the newsroom. His smile and positive spirit was talked about the rest of the day.

“See you Monday!” Mac said as he left with a huge smile.