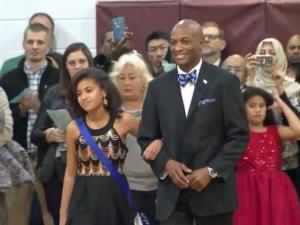 Much like the events in Washington D. C., the annual inaugural ball had all the markings of a new beginning.

This year’s class president is Isabella Clark and she, like so many children her age, have only known one president- Barack Obama.

“I learned how to be a leader everywhere I went from him. He was a great role model not only to adults but to every student,” Clark said.

A.B. Combs is a school that, at its core, celebrates and teaches leadership.

Much like Clark was elected to lead A.B. Combs, so too was Trump chosen to lead the country. Clark’s predecessor, Emily Schmidt, who has also only known Obama as president, believes the country should give Trump a chance.

“I feel like he will bring a different perspective into the White House. I’m not sure how that will affect the nation. I feel like he would be a good leader too though,” Schmidt said.

A.B. Combs President Clark and Trump have a dance with democracy ahead in order to get their goals accomplished. How graceful that dance is all depends on leadership.

“I am learning from the children that great leadership can be found in the most unexpected places,” said Principal Muriel Summers.