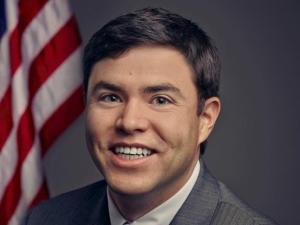 Raleigh, N.C. — Newly installed State Superintendent of Public Instruction Mark Johnson plans to take part in a court battle over a recently-passed law that transfers power from the State Board of Education to Johnson.

The state board filed the suit last month to block the the measure, House Bill 17, and a Superior Court judge issued a temporary restraining order to prevent the new law from taking effect.

That restraining order will remain in effect until a three-judge panel makes a decision. The judges plan to hear the case on June 29.

Johnson was in court Friday as the judges decided when to hold the next hearing in the case. An attorney representing him told the judges that they will make a formal notice that Johnson wants to be heard as part of the lawsuit.

Andrew Erteschik, an attorney representing the State Board of Education, said they are “not objecting” to Johnson being part of the lawsuit.

“We are consenting to that,” he said. “The law will remain blocked until the court makes a decision after the June 29th hearing.”

Under the new law, Johnson would have more flexibility in managing the state’s education budget, more authority to dismiss senior level employees, control of the Office of Charter Schools and the ability to choose the leader of the new Achievement School District, which will oversee some of the lowest-performing schools in the state.

Those powers have been under the State Board of Education’s control.

Johnson has publicly supported the new law and said the changes “will help usher in an era of greater transparency” and create a system of state oversight of public schools “similar to how local superintendents and their respective boards of education work together across North Carolina.”

State Board Chairman Bill Cobey has criticized the law, saying it threatens the working relationship between the board and Johnson. In a recent interview on Education Matters, a show broadcast on WRAL-TV, Cobey said the board was “as surprised as anybody when the legislation came forward.”