Raleigh, N.C. — Fog early Saturday morning obscured normal visibility around the Triangle ahead of rain and potentially severe storms to finish out the weekend.

Temperatures hovered near 50 degrees for many towns around Raleigh. Most of the day should remain dry until about 4 p.m. when the chance for showers increases heading into Sunday.

“You can see we’re still under mild temperatures with the really cold stuff bottled up well to our north,” said WRAL meteorologist Mike Moss.

Those temperatures won’t change much throughout the day, peaking around 60 degrees but settling back into the mid-50s in the evening.

A strong storm system moving across the deep South will head northeast throughout the day and eventually bring a chance of rain to central North Carolina in the evening.

Another disturbance farther to the west, though, will make its way toward the East Coast on Sunday, Moss said. The low pressure system will bring a chance for more serious weather.

“As that get here late tomorrow and tomorrow night, it could trigger a round of heavy showers and perhaps some strong or severe thunderstorms for our area,” Moss said. 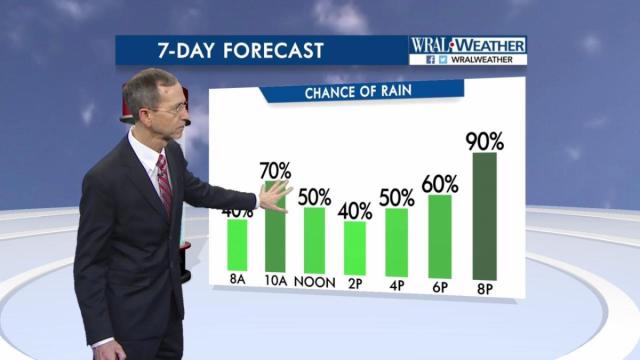