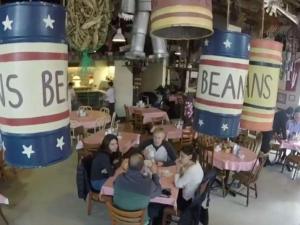 Raleigh, N.C. — While President Donald Trump took the oath of office in Washington, D.C., Jamie and Ellen Munn took some time for lunch at Big Ed’s in Raleigh.

The couple tried to eat at a different restaurant, but it was blaring the inauguration on TV, and Ellen Munn couldn’t stand it.

Jamie Munn voted for the newly inaugurated Trump. Ellen Munn, though, voted for his Democratic rival Hillary Clinton. She didn’t know until after the election that her husband voted for Trump, but Jamie Munn said their difference in political candidates hasn’t affect their lives.

Now that Trump is officially president, Ellen Munn isn’t hopeful about the next four years, counting gay rights and women’s right among the topics that worry her.

“He scares me,” Ellen Munn said. “I’m frightened about what he might do.”

Jamie Munn said he has the opposite feeling: He’s hopeful about the changing of the guard, though he does wish the president would back off the Twitter spats, calling Trump “a little thin-skinned.”

“I just want to see if he fulfills his promise,” Jamie Munn said. “He promised quite a bit, so see if he can close the deal, come up with everything he said.”

Trump voter J.T. Thomas hopes the president will tone down his brashness, too, but continue to be bold.

Like Ellen Munn, Partice Smith also voted for Clinton in November. She conceded Trump was a tough talker, but she also feels hopeful for the future.

“I think if (Trump) listens—I think it’s going to take him to be able to listen to the voce of the people and be able to compromise and not just say, ‘It’s my way, this is the way I think,'” Smith said