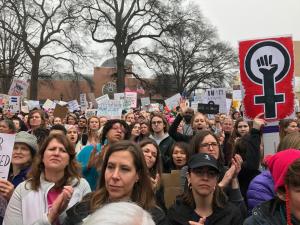 Raleigh, N.C. — Thousands of people on Saturday gathered in downtown Raleigh for the Women’s March to express concern about the future of women’s rights under President Donald Trump’s administration.

Members of the crowd, bearing homemade signs, flooded Fayetteville Street to voice their opinions just one day after Trump’s inauguration. Organizers estimated 17,000 people turned out for the event.

Cities around the world, such as Sydney, Paris and Copenhagen, joined Raleigh, Charlotte and Washington, D.C., in similar marches. Dozens of other cities in the United States, including Denver, San Francisco and Seattle, held marches, as well.