Hours Remain for NC Residents to Register for FEMA Assistance 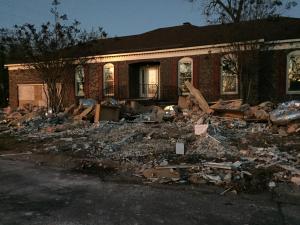 RALEIGH, N.C. — Monday, Jan. 23 is the deadline for North Carolina residents affected by Hurricane Matthew to register for federal assistance.

Several-dozen North Carolina counties affected by the storm are in an area that has been declared for individual assistance.

Registering with FEMA is the first step toward determining eligibility.

A FEMA website says that people have until just before midnight on Monday night to register.

The federal agency said Sunday it has approved $90 million in assistance so far through its individuals and households program, but FEMA spokesperson Nate Custer said he knows there are more people who could qualify.

Custer said people who had minor damage, or made minor repairs to their homes or businesses could also receive money.

“You probably spent money on materials. You may have hired a contractor,” he said. “That could be considered on a case-by-case basis for possible reimbursement by FEMA, so as long as it’s not covered by insurance.”

Paul White has been working to get his neighbors back on their feet after the storm. He said being registered with FEMA has helped to send other agencies to his neighborhood.

“They provide a wealth of resources and there is a wealth of volunteers that are all connected to people through FEMA, and one of the only ways that they find out that you are damaged it that people applied through FEMA,” White said.

North Carolina Gov. Roy Cooper has encouraged all those who were impacted by Hurricane Matthew to register with FEMA, even those who have insurance. FEMA cannot duplicate insurance payments, but if you are underinsured, you may receive help after your claim has been settled.

The government offers the site www.disasterassistance.gov for applications as well as phone numbers including 800-621-3362. There are also places people can apply in person, or they can download a FEMA phone app off the website.