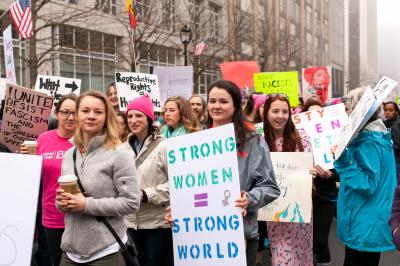 Raleigh, N.C. — Hundreds of thousands of people marched in cities around the world this weekend demanding their voices be heard in the White House. Now that the events are over, however, many are asking what happens next.

Officials estimate more than 2 million people took part in the marches across the U.S. Saturday, and other demonstrators were held globally – even off the coast of Antarctica. The size of the march in Raleigh stunned organizers, who expected 3,000 to 5,000 people and wound up with 25,000 in downtown streets.

“We were so thrilled. It was fantastic. It was, like, beyond our wildest expectations,” organizer Sarah Moncelle said. “It was so gratifying to see so many people turn out and sort of share our need to come together and organize and push back against sme of the aggressive policies that are coming our way.”

People rallied for a long list of causes, from civil rights to reproductive rights to the environment. Meredith College political science professor David McLennan said that range of interests makes it challenging to harness the energy from the march and fulfill the expectations the event created.

“Any time you have that kind of diversity in terms of views, it’s hard to kind of get people moving toward the same goal,” McLennan said.

Moncelle said that wasn’t the goal, noting the main objective was to gather people and connect them with existing organizations that are already doing work in areas people care about.

About 10,000 people have already supplied their contact info online, along with a pledge to take action, she said.

McLennan said the organizers can follow the blueprint created by the tea party eight years ago.

“It starts at the local level. We can apply pressure on primary races,” he said. “I think that’s where the leaders might go, is start with raising money and start identifying particular political campaigns or particular issues here – even here in North Carolina – that they can have some effect on.”

Organizer Gailya Paliga said she believes people will follow up and get involved, and she doesn’t think the energy will dissipate anytime soon.

“Generations of families went. It was a real empowering event,” Paliga said.