“Message to crazies @ Women’s March– If brains were lard, you couldn’t grease a small skillet. You known who you are,” she wrote on Twitter. 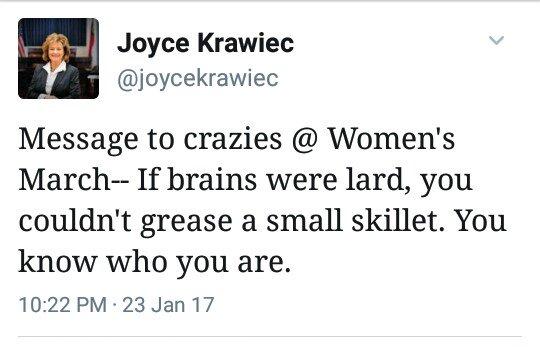 The tweet, which was posted at 10:22 p.m., drew a fierce backlash online. Among the responses were:

@joycekrawiec yet another elected official claiming to love God and freedom demonstrating the exact opposite. Quite sad.

By Tuesday morning, the response had prompted Krawiec to delete the offending message and send out four messages apologizing.

BTW I was only speaking of the DC protesters dressed inappropriately and spewing foul language. Disrespecting women. Not representing women

I applaud those women who were there for the cause and were respectful. They know who they are.

I apologize to those women who marched for right reasons. I was only talking about those I described. They didn’t speak for all women

This is the second time this week that a state official drew criticism for remarks about the Women’s March made on social media. Insurance Commissioner Mike Causey apologized Monday for a Facebook post that described participants in the march as “fat women.”