Get an Inside Look at Trophy Brewing’s New Restaurant 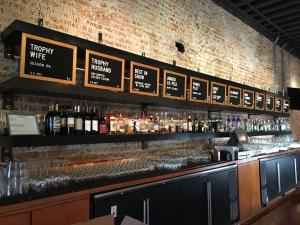 Raleigh, N.C. — Fans of Trophy Brewing will be able to get their fix somewhere new starting Tuesday afternoon. Trophy Tap and Table opens its doors at 225 S. Wilmington St. at 4 p.m., according to co-owner Chris Powers.

Out and About contributor and blogger John Huisman aka the Triangle Explorer broke the news via Twitter late Monday.

The restaurant and bar is in the old home of Busy Bee Cafe, which closed on Jan. 1 after eight years in business. Construction on Trophy Tap began the next day with crews renovating the kitchen and draft system, including putting in all new draft equipment.

The same owners are behind both ventures, in addition to State of Beer and Trophy Brewing Company (which has locations on Maywood Avenue and West Morgan Street).

Trophy Tap and Table has added four taps. Eight of those will be Trophy beers, four will feature guest breweries and the remaining four taps will be wine.

Tuesday’s opening also coincides with the Cloudy Surfer beer release. This New England style IPA will be available in 16 oz. cans and by four pack.

The food menu is focused heavily on rotisserie chicken with quarter, half and whole chicken options. There are three housemade sauces to go with the chicken – Alabama White (a mild sauce with a vinegar kick), Beer Mustard (which is made using the Trophy Wife IPA and brown mustard) and the hottest sauce Sambal (a spicy Indian pepper sauce).

Besides rotisserie chicken, Trophy Tap and Table also features some small plate options – cheese and pickle plates, corn hush puppies, chilled bean and corn salad and rotisserie chicken tortilla soup. A notable starter is the rotisserie Nashville hot wings, which are tossed in a cayenne and brown sugar based sauce.

In addition there will be three salad selections (arugula, mixed green and kale) and host of sides including red beans and rice, fingerling potatoes, plantain chips, apple slaw and grilled balsamic carrots and green beans.

A notable dessert option is the Beer Float featuring an in house made vanilla semifreddo and Trophy’s Milky Way salted caramel sweet stout.

The upstairs section, which formerly houses The Hive and more recently Mash and Lauter, will be the same concept, Powers said, but will mostly be used as a private event space.