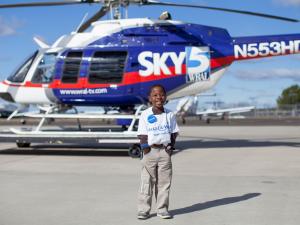 The ride was originally scheduled for Monday, but rainy weather caused it to be postponed. But with his positive attitude, Mac was smiling and ready to fly Tuesday morning with clear skies.

“Mac was up before the sun, and before I was up he was fully-dressed with his Make-A-Wish shirt on ready to go,” Belinda Hogstrom said. “This is a huge positive in his life. He will never forget this day.”

“It was a bummer that yesterday we had to have a delay because Mac gets bad news all the time, but because of the beautiful weather and all the people who came out, it definitely made up for it,” said WRAL assignment editor Mary Alice Bell, who coordinated the wish from WRAL.

Mac and family were picked up by limo driver Paul Beaudoin, who drives many local wish kids for Make-A-Wish Eastern North Carolina.

Mac boarded Sky 5 with pilot Steve Wiley, his father, Matt Hogstrom, and WRAL photographer Keith Baker. Departing from Raleigh-Durham International Airport, they flew over some of his favorite landmarks and locations in Raleigh and Durham, including the Hogstroms’ house, Duke Hospital, the Durham Bulls Athletic Park, Marbles Kids Museum and his family’s church.

Matt Hogstrom said Mac was a little nervous climbing into the helicopter, but once he was in the air, he loved pointing out the landmarks he recognized.

“I think he didn’t know what to expect, but once we took off and started looking around, he loved it,” he said. “Like we say at home, ‘Mac was on’.” 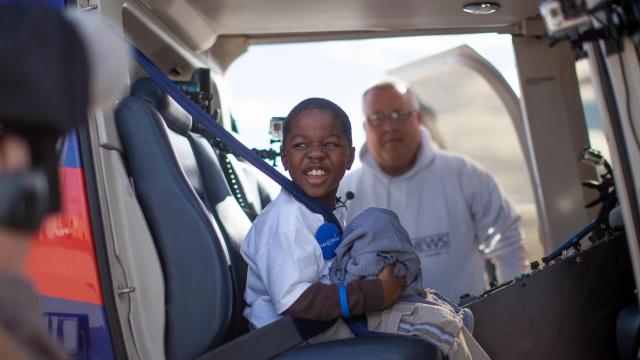 There were a few tears of joy as the helicopter lifted, and the group clapped as Sky 5 disappeared into the distance.

“He’s been looking forward to this for so long,” Mac’s mother, Belinda Hogstrom said. “I’m just very happy for him that this day is finally here.” 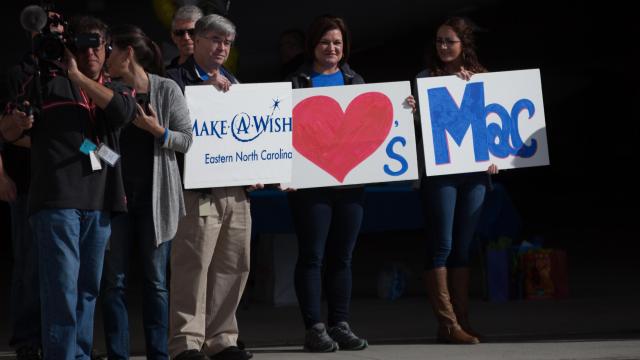 Mac landed to a birthday party with his siblings to celebrate his eighth birthday, which was on Sunday. He opened a few gifts, including a gift card to pick out his own remote control helicopter and family tickets to any Durham Bulls game — where he will throw the first pitch.

“It’s a beautiful day for flying and we’re just so excited to be here,” said Make-A-Wish Eastern North Carolina President and CEO Kristen Johnson. “We’re just along for the ride now, and we’re so happy for him.” 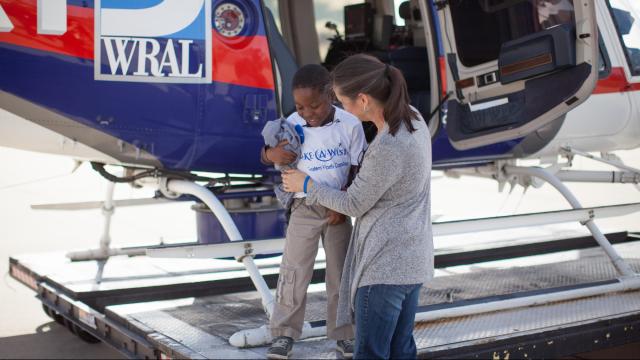 Several members from the North Carolina State University’s chapter of Chi Omega came out to support Mac during his wish. Make-A-Wish is the sorority’s national philanthropy, and the NC State chapter raises money annually for Make-A-Wish Eastern North Carolina.

Lauren Edwards, a member of Chi Omega, also works as an intern at Make-A-Wish Eastern North Carolina’s office in Morrisville.

“We’ve loved meeting Mac,” she said. “It’s so fun when we do events, and we know we’re making a difference, but actually seeing is such a rare opportunity,” Edwards said. “Make-A-Wish is so important because through all the hardships these families have to go through, it gives them a break from the hard things and gives them hope and relief.”

Mac also made two passes over the WRAL Studios on Western Boulevard in Raleigh, where the staff turned out to wave to him.

“We saw a whole bunch of people way back there waving back and forth,” Mac said after landing. 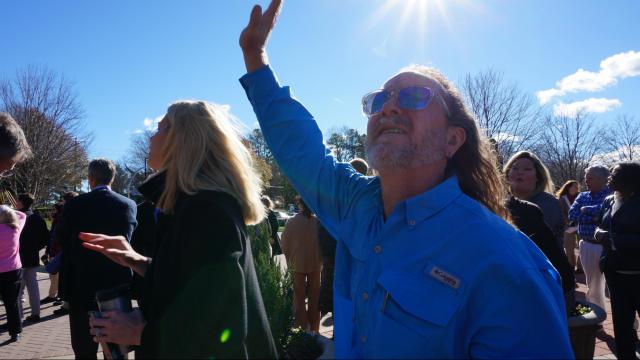 Mac developed an interest for helicopters during his stays at Duke Children’s Hospital, where he could watch them takeoff and land. Make-A-Wish asked WRAL to help fulfill his wish for a helicopter ride in Sky 5.

Tricia and Ernie Jarrell were wish volunteers for Mac’s wish. Tricia has been a volunteer for four years through Make-A-Wish Eastern North Carolina. Mac’s wish happens to be the 30th wish she has helped fulfill as a volunteer, and she recruited her husband who is on his fourth.

“Is just so much fun,” Tricia Jarrell said. “Just to see his smile and excitement is why I do this. I’ve met some of the most wonderful families.” 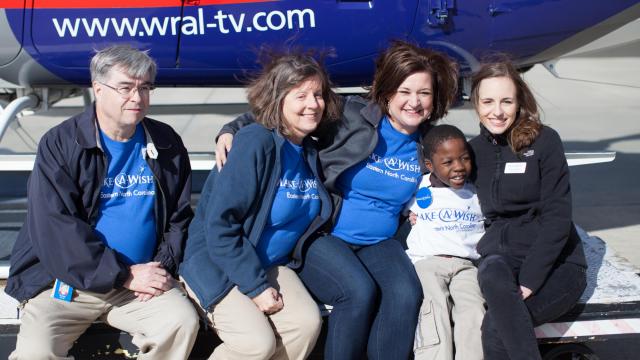 Pilot Steve Wiley said the flight was a success and he was inspired by the Hogstrom family, who has fostered dozens of children over the years.

“What a selfless family to do what they’re doing,” he said. “It just blows me away.”

Mac learned that his wish to fly would be granted during a visit to WRAL Studios last week.

“This is the best day ever,” Mac said as he jumped in the air upon landing.