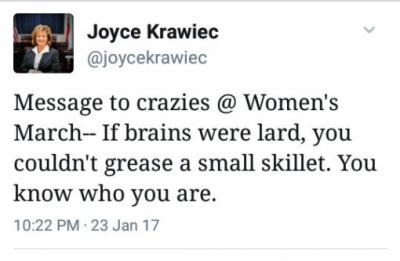 Raleigh, N.C. — How far is too far when it comes to politicians and social media? Two North Carolina elected officials are the latest to apologize for their social media posts.

“Message to crazies @ Women’s March– If brains were lard, you couldn’t grease a small skillet. You know who you are,” she wrote on Twitter.

Insurance Commissioner Mike Causey apologized Monday for a Facebook post that described participants in the march as “fat women.”

“In one day, Trump got more fat women out walking than Michelle Obama did in 8 years,” the post read.

Meredith College political science professor David McLennan said it is a sign of the rapidly changing times, brought on in part by social media.

“The whole environment about communication related to politics has gotten harsher, and I think it’s a direct byproduct of the last presidential campaign,” McLennan said.

The campaign was littered with personal insults on social media.

“Now, we’re seeing state officials do it, writers for ‘Saturday Night Live’ tweet about the president’s 10-year-old son,” McLennan said. “We remember a decade or so ago, someone who sent an email or made a statement that was even borderline offensive, sometimes it had major repercussions, but now it doesn’t have the same impact.”

Both Causey and Krawiec issued apologies and deleted their posts. They also said they each learned a lesson.