Sheriff: Mental Illness Is ‘Sad, but a Problem’ in Wake County Prisons 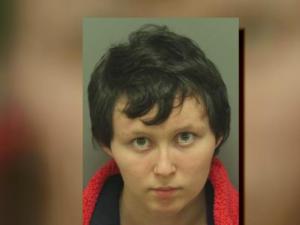 Raleigh, N.C. — A Wake County case is shining a light on mental health and the criminal justice system after a former Wake County student was arrested for stalking one of her former teachers.

When Abigail Killion, 21, walked onto the campus of Wakefield High School this week, carrying what police describe as a 4-inch steak knife and looking for a former teacher, it was the second such incident involving the former student. The first time, police said she had a bag of knives and was searching for the same teacher.

Killion’s mother told the court Wednesday that her daughter suffers from mental illness and she has tried over the years to get her help.

Ann Akland is on the board of Wake County’s National Alliance on Mental Illness. She said usually people with mental illness are not violent. Although Killion was found with knives, she never acted violently during either incident.

“It’s just so distressing, it really is,” Akland said. “She had reached some point, maybe she was delusional, maybe it was some obsession that she had and that’s just how it manifested itself.”

Mental illness can be a challenge for parents, especially if their son or daughter is an adult, like Killion. If parents opt for an involuntary commitment, that involves paperwork and law enforcement.

Akland said while Wake County hospitals are doing what they can, none have in-patient psychology units. In many cases, those with mental illnesses who commit crimes end up at the Wake County Detention Center like Killion.

Harrison said prisoners going through an immediate screening to determine their mental health.

“We had 1,246 in jail today so, with taxpayers money and we being probably the largest mental health facility in the state, its costing tax payers,” he said.

By the numbers, Harrison estimates more than 65 percent of prisoners suffer from some type of mental illness. He contracts with mental health professionals to take care of them and psychiatrists are available seven days a week.

Harrison and Akland agree that more needs to be done to help people like Killion.

“The good thing is the county commissioners and a lot of other people are really working with us to make it better for the people that come in here,” Harrison said.

Killion’s parents told the court they hope to get her the help she needs. She is due back in court next month.