Politicians Turn to Social Media: No Filter, No Follow-Ups 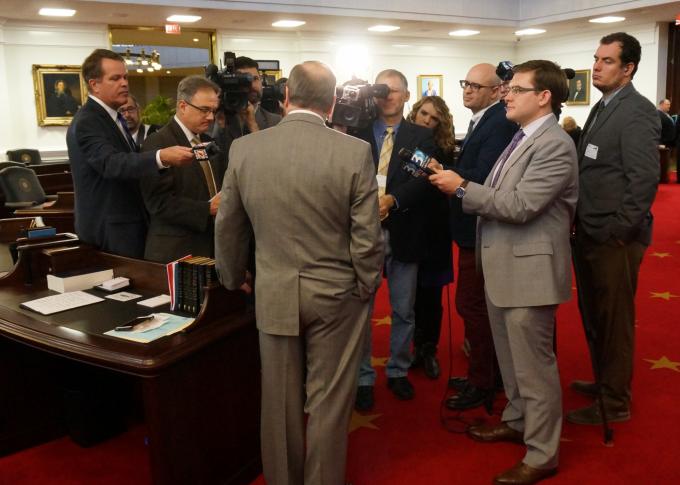 Raleigh, N.C. — President Donald Trump is such a Twitter aficionado that he is sometimes referred to as “tweeter-in-chief.” But other politicians are also bypassing traditional media and turning to social media to communicate with people.

Gov. Roy Cooper, for example, chose to spell out his legislative priorities this week in a post on a social media site called Medium instead of in a press release. Senate President Pro Tem Phil Berger then responded with a Facebook post.

“This is, I’m sorry, sort of old school at this point,” Berger, R-Rockingham, said with a laugh about holding news conferences at the General Assembly.

The advantage of social media, Berger said, is that his message doesn’t get cut down to a sound bite.

“If we have something to say, we can say it in our own voice and using the language that we want to convey. I think that’s helpful,” he said.

“The goal is to communicate and listen to more taxpayers,” Porter said. “People are getting their information, learning about their public figures, from a lot more different outlets. So, there’s more for us to do.”

Steven Greene, a political science professor at North Carolina State University, said social media can help leaders connect with constituents, but it also allows them to put out their points unchallenged.

“Rarely does any public servant give you the unvarnished truth. I mean, it may not be alternative facts, but it’s at least going to be spin,” Greene said. “When viewers think they can just get it all straight from the politician, we’re really losing an important check.”

When McCrory conceded the election in early December after weeks of challenging vote counts, he did it in a YouTube video, which allowed him to avoid having to answer questions from reporters.

“If you’re going to put out the tweets, the Facebook, the YouTube, fine. But if you’re doing that instead of talking to the press, that’s a problem,” he continued.

Another potential pitfall of social media is that it can go awry pretty quickly.

Berger said politicians have to be careful about how they use social media.

“There are all sorts of examples of Twitter going awry, and yeah, that’s a concern,” he said.