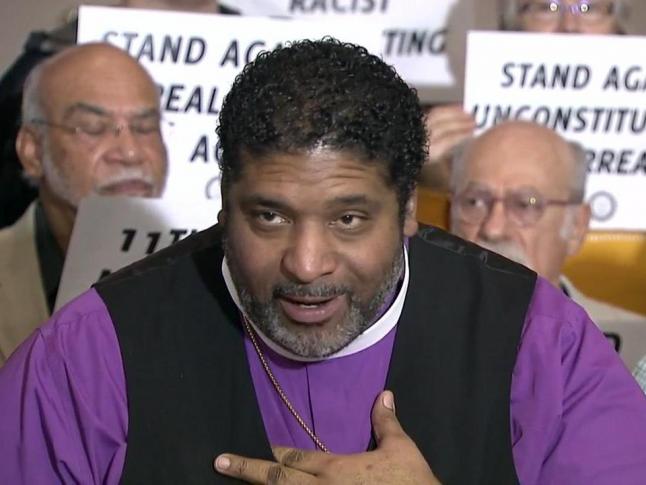 “When a president of this country … puts his hand on the Bible and swears to uphold the Constitution, that ought to mean something,” Barber said at a news conference.

He cited Trump’s plans to erect a wall on the U.S.-Mexico border and crack down on cities that don’t assist in tracking down people in the country illegally, cabinet appointments that oppose voting rights and health care for all and the president’s order on Friday temporarily suspending immigration from seven Muslim-majority nations as well as all refugees seeking to settle in the U.S.

“We’re calling all Muslims to join us, all of our Latino brothers and sisters to join us and all people regardless of your race or your color that believes that everybody is a person that God created and they ought to be respected,” Barber said. “We stand against building walls. We want to build a beloved community. We want to build bridges. If America was against the Berlin Wall, how in the hell are we going to build a wall right here in America?”

Barber said the flurry of actions taken by the Trump administration over the past 10 days is like the country “took an extremism pill,” and he praised the thousands of people who protested the immigration order at airports nationwide over the weekend.

“We’re not going to just stand down and watch this extremism proceed in all of these ways and just hurt so many people’s lives and undermine the fundamental principles of human rights, constitutional rights and our deepest moral values,” he said. “Soon, this president’s administration will come to the conclusion, I hope, that there is a group called ‘we the people,’ and we the people are not going anywhere and we’re not going to give up on this democracy.”

The March 11 march against “Trumpism” follows a Feb. 11 march in downtown Raleigh to protest actions by the North Carolina General Assembly, such as racial and political gerrymandering of voting districts, refusal to expand Medicaid and failure to repeal House Bill 2, which limits LGBT rights and prevents cities from setting their own minimum wage.