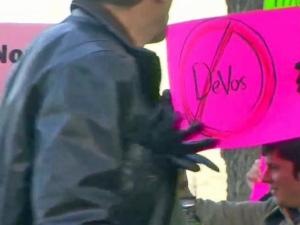 The cold temperatures wouldn’t stop the few dozen people who marched and chanted in opposition of Trump’s picks for education secretary and Attorney General. Their message wasn’t new, but with major changes on the horizon, their energy was renewed.

“He needs to pick up the phone and listen to all those messages of people who have been calling in for weeks now to tell him to vote no,” said protester Clinton Wright.

Protesters said they want Tillis to say no to Trump’s pick for Attorney General, Jeff Sessions, and say no to the confirmation of Betsy DeVos as education secretary.

In 1986, Sessions was denied the opportunity to serve as a federal judge after allegations of racist comments. He denied the allegations.

As for DeVos, protesters said she will be terrible for public education.

Tillis has said recently that he backs Sessions and believes he will follow the rule of the law. Protesters didn’t believe they will get their message through to him on DeVos either, but it won’t stop them from trying.

Tillis has voiced support for Sessions and DeVos in the past, but did not offer a direct response to WRAL’s request for a comment on the protest. His office issued the following statement: