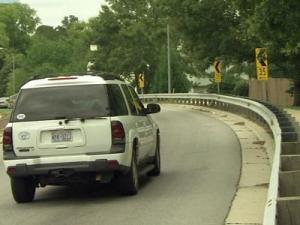 Raleigh, N.C. — A family in North Raleigh said they fear for their safety after three cars crashed at their home in a little more than a year.

The Bernartes live on New Hope Road – where drivers often go too fast along a curve in the road and end up crashing at their house.

Carlo Bernarte said he and his wife have, for safety reasons, stopped sleeping in their master bedroom and have moved to their spare room.

“It always happens when we are sleeping,” Bernarte said.

In May 2007, three people died when their car slammed through the neighborhood’s stone entrance wall. Rocks from the wall shattered windows in the family room.

Two weeks later another car crashed at the home. This past July another wreck car occurred there.

“The debris from the fence came through the window…shattered glass all over again,” Bernarte said. He described third accident as “unreal.”

Bernarte is especially frustrated because a neighborhood representative contacted the N.C. Department of Transportation more than a year ago to request a guardrail. The DOT denied the request saying the agency “does not install guardrails to protect private property.” A DOT review found most of the crashes involved speed or alcohol, not the curve.

The people that live behind it complained after seven cars crashed at that curve; Four of those cars went straight into their backyards. After 5 on Your Side got involved, the City of Raleigh agreed that a guardrail was necessary. A guardrail nearby Bernarte’s home was installed six years ago.

In the last 14 years, at least 14 cars have crashed around the intersection of New Hope Road and Fawn Glenn Drive. Nine of those cars went into yards. Five on Your Side contacted both the DOT and the City of Raleigh transportation leaders to review the situation.

“We can’t engineer out the speeding and the alcohol. Even if we installed a guard rail there that does not mean someone travelling 120 mph is going to be stopped from hitting their home,” Raleigh Transportation Operations Manager Mike Kennon said.

Kennon said the city considered everything from safety to cost to aesthetics and like the state, determined a guardrail in front of Bernarte’s home was not the answer.

“The solution is to get people to obey the law,” Kennon said.