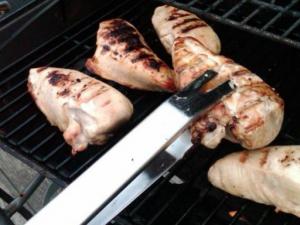 Raleigh, N.C. — Stepping into the backyard to grill some corn, ribs or hamburgers is no big deal for the average homeowner, but it’s something most cooks working at restaurants in North Carolina aren’t allowed to do.

Sen. Tom McInnis, R-Richmond, filed Senate Bill 24 in an attempt to to change that, along with co-sponsors Sen. Jeff Tarte, R-Mecklenburg, and Sen. Jim Davis, R-Macon.

“In rural North Carolina, we have a lot of little small mom-and-pop restaurants,” McInnis said shortly after filing the measure. “These restaurants are at crossroads and little small towns and villages, and most of them can’t afford the cost of a hood system and a fire suppression system.”

Those safety systems can cost in the tens of thousands of dollars, he said, and raising prices isn’t an option in areas where a sluggish economy limits disposable income.

“They’ve got to be able to provide food and an inexpensive price,” he said.

But without those safety measures, restaurants can’t put in cooktops that could potentially flame up under heavy use. Many restaurant owners would gladly do what weekend chefs across the state do and head out back to fire up the grill, but health regulations don’t allow that, McInnis said.

“You have the ability with our barbecue restaurants to do that already, but they’re grandfathered,” he said. “So, they meet the grandfather requirement, and that’s why they’re able to do it.”

McInnis’ bill is modeled on similar measures from South Carolina, Tennessee and Texas and would require the grill to be stainless steel, set on a concrete pad and be protected by a semi-permanent cover.

He acknowledged that he may face opposition from health departments and industry groups. His bill fits in with a long line of measures designed to ease regulations on small, rural restaurants including a bill allowing one country store to serve pimento cheese sandwiches and last year’s bill to allow seating in certain convenience marts, which became known as the “biscuit bill.”