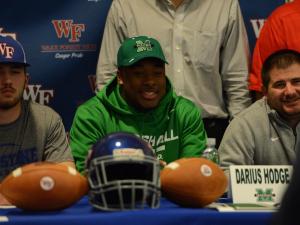 Hodge committed to the NC State on June 15. Reports have stated and HighSchoolOT.com sources have confirmed that NC State wanted Hodge to play a year in junior college before joining the Wolfpack.

This past weekend, Hodge took an official visit to Marshall.

“The academic program really stood out to me and my family. And a plus about it, the team was good. It’s a football town and I felt like I was at home,” Hodge said. “They say every weekend on game weeks the town shuts down.”

“He’s excited about it. He took the visit to Marshall and it worked out great for Darius and his family. I’m just thrilled he’s about to go to a school and start right away with his college career,” Lucas said.

The standout linebacker tallied a team-high 136 tackles – 31 for loss – 14 quarterback hurries, nine sacks and eight interceptions in his senior campaign. He was named the Associated Press’ Defensive Player of the Year for the state of North Carolina.

Hodge said Marshall plans to use him at middle linebacker and send him off the edge on third down situations. From an academic standpoint, Hodge plans to study social work.

“I think he connected with the coaches in a short amount of time, but at the same time I think it was a great fit academically and also playing-wise,” Lucas said.

“It was a blessing. It feels like yesterday I was a freshman, so to come in here and celebrate with my teammates, it’s a blessing,” Hodge said.

Wake Forest is known for its defense, and on National Signing Day, two other defensive players joined Hodge signing National Letters of Intent.

Jake Campbell and Mason Gilbert both signed with Limestone on Wednesday.

During the team’s run to the state championship, Campbell recorded 100 tackles, including 37 solo tackles and 19 tackles for a loss. He also had one interception and one fumble recovery.

Gilbert also had a strong senior season. Behind Hodge, Gilbert was the second-leading tackler for the Cougars, posting 101 total tackles. He had 27 solo tackles and 17 tackles for a loss.

Hodge, Campbell and Gilbert join Xach Gill as Wake Forest football players who have signed with colleges. Gill has already enrolled at the University of North Carolina at Chapel Hill.

“To have four guys sign on signing day, I feel blessed as their coach, but it tells you how much the program has improved. We normally have one big guy sign with a big school, today we have four guys,” Lucas said.