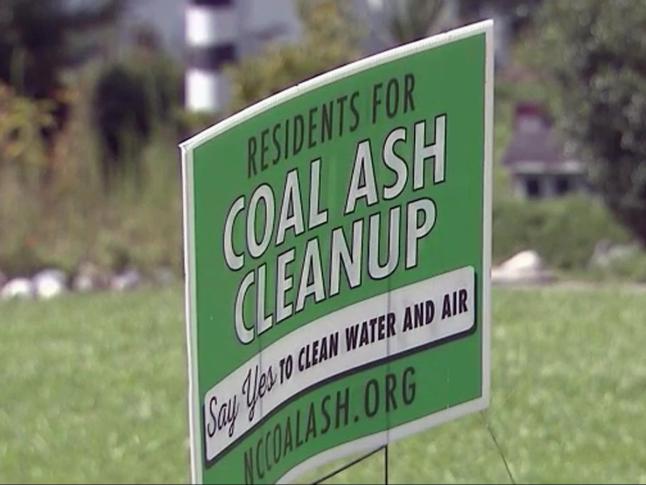 Tons of toxic coal ash dumped into the Dan River near Eden on Feb. 2, 2014, when a stormwater pipe that ran under an ash pond at a shuttered Duke Energy plant ruptured. The General Assembly has since passed several laws requiring Duke to clean up its 32 ash ponds statewide by excavating some and capping others and to supply water to households with wells near the ponds.

Environmental groups said Wednesday that they want stricter measures, including requiring Duke to recycle more of the ash, providing water to more households and enacting new drinking water standards to measure whether wells are safe.

Hope Taylor, executive director of Clean Water for North Carolina, said she hasn’t forgotten last year’s fight between state regulators and health officials over “do not drink” orders that were sent to well owners near ash ponds and later rescinded.

Gov. Roy Cooper said his Department of Environmental Quality has already approved an agreement with Duke about homeowners who live near ash ponds, and he said DEQ Secretary Michael Regan will take a long-term look at whether the clean-up plans in place are sufficient.

“This will be a stakeholder process. We want environmentalists, we want Duke Energy, we want people who are affected by this, and we want to rely on science,” he said. “We want to do what science dictates is the right thing to do for the health of our people.”

Taylor and other advocates also called on lawmakers to rescind part of a 2016 law that allows Duke to leave most of its coal ash in the ground in unlined pits using a process called “cap in place.”

Bill Collins, who lives near the ash ponds at the Allen Steam Plant in Gaston County, said simply covering the ponds won’t protect nearby groundwater.

“For 59 years, coal ash has been deposited there. It’s been leaching contaminants into our aquifer, and it will continue to do so as long as it’s there,” Collins said.

Duke spokesman Jeff Brooks said many of the heavy metals found in the ash occur naturally in North Carolina, and none of the company’s tests have shown ash ponds contaminated nearby drinking wells.

“Our ongoing science doesn’t indicate a connection between Duke Energy’s operations and those well findings, but we want to provide that peace of mind to ensure the most flexible closure options for responsibly and safely closing coal ash basins across the state,” Brooks said.

Duke is meeting all deadlines and requirements for clean-up set by lawmakers, he said, adding that digging up all of the coal ash in the state and moving it to lined landfills isn’t scientifically supported and would lead to higher energy prices for consumers.

Brooks also said the Charlotte-based utility is moving to provide alternative water supplies to concerned homeowners, and the company has two ash recycling plants in the works.