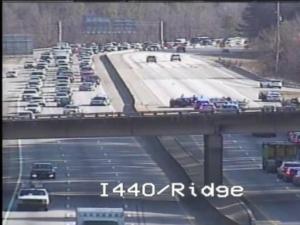 Raleigh, N.C. — A brief police chase on Interstate 440 in Raleigh caused a traffic backup in both directions Thursday morning.

According to the North Carolina Highway Patrol, a trooper was attempting to pull over a vehicle with a false license plate but the vehicle, which had three men inside, fled.

The Highway Patrol trooper attempted a pit maneuver near Glen Eden Road, causing the vehicle to come to an almost complete stop, at which time a passenger in the back seat jumped out and ran.

The vehicle then sped away again, authorities said, and the trooper attempted another pit maneuver near Glenwood Avenue.

The two men who were still in the car were apprehended without incident and the suspect who jumped from the vehicle was located a by Raleigh police a short time later.