Cold Weekend Coming, but Flakes Will Be Few 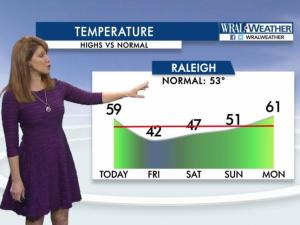 Raleigh, N.C. — Those who long for colder temperatures to match the calendar will get their wish Friday and Saturday, when daytime highs won’t get out of the 40s in central North Carolina.

If you long for snow with your chill, you will likely be disappointed.

While there is about a 40 percent chance for precipitation Friday morning, it’s unlikely to get and stay cold enough for more than a stray flurry or two, WRAL meteorologist Elizabeth Gardner said.

The temperature at dawn, when the chance of precipitation peaks, will be just above freezing.

“That may still be cold enough for a little sleet or flurries as the precipitation begins,” Gardner said. “The best chance of that will from Raleigh north. The amounts will be very light and won’t cause travel problems. Otherwise expect patchy light rain until just after lunchtime.”

The hint of snow comes on the heels of Groundhog Day, when Sir Walter Wally, Raleigh’s resident groundhog, predicted an early end to winter. Wally failed to see a shadow outside the North Carolina Museum of Natural Sciences on Thursday afternoon, meaning an early spring for the region, Raleigh Mayor Nancy McFarlane said.

Should you rely on a rodent? Wally has a pretty good record. He has predicted the end of winter correctly 82 percent of the time.