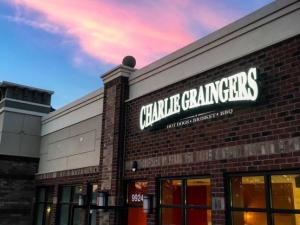 Carrboro is getting cooler and cooler, and the latest announcement certainly helps. The owners of Al’s Burger Shack in Chapel Hill are opening a new restaurant in Carrboro called Mel’s Commissary & Luncheonette. Melody Bowers and her husband, Al, plan to open the concept in March at 109 W. Main Street where Tres Amigos Restaurant and Cantina used to be.

And here’s an update on the newest Charlie Graingers location on Chapel Hill Road. According to a reader who was in that location, they will swing open their doors next Monday, Feb. 6. The restaurant is known for their world famous hot dogs, BBQ, brisket and pimento cheese.

Got word from David Prestrud at Plan A. Architecture that Lume Grill is coming to Cary in the old Pita Bon/Loop Pizza spot on Kildaire Farm Road. Unfortunately, we don’t have a timeline or a link to share, but we will keep an eye on it. Thanks David!

Also in Cary, Prestrud shared that Pro’s Epicueran Market & Cafe is coming to 211 E. Chatham Street in front of Bond Brothers Brewery. It touts itself as an eclectic market, wine bar and café featuring authentic Italian, French and European cuisine.

Over in Raleigh’s North Ridge Shopping Center, Triangle Business Journal reported this week that Zoe’s Kitchen and Chopt Creative Salad Company will open locations there. The North Ridge location will be Chopt’s second in Raleigh, which opened its first at Cameron Village in December. Zoe’s Kitchen has three locations in Raleigh and Morrisville, plus a fourth location planned at the Shops at Eastgate on 1800 E. Franklin Street in Chapel Hill.

And finally, the good folks over at the Western Wake Farmers Market are trying to secure a “forever” home in partnership with the town of Morrisville. It would be a wonderful addition to the community, and they need your support. If you are inclined, jump over to the site to see how you can contribute to make this a reality. Thanks!

Chapel Hill’s legendary La Residence reopened on Feb. 2 after being closed since June of last year due to a fire. Time to work them back into your rotation!

We are getting closer and closer to the opening of Stoney River Steakhouse in Chapel Hill’s University Place on Estes Drive. It is located in the space just in front of the new Silverspot Cinema. Stoney River is part of the J. Alexander’s group (which just opened a J. Alexander’s Restaurant up the hill from Crabtree Valley Mall in Raleigh).

Also in Chapel Hill, John Huisman (aka Triangle Explorer) shared that the Honeysuckle Tea House will open for the season on April 1. If you’ve never been, it is worth the trek.

John also brought it to our attention that Sangha Tea is moving towards opening a permanent location in Chapel Hill. We don’t know where yet, but there is a photo of the interior of the space on their Twitter feed. Stay tuned!

An update on the news last month that Jasmin Mediterranean had closed their location in the heart of downtown Chapel Hill (intersection of Columbia and Franklin) to make way for Lotsa Stone Fired Pizza. We learned this week that Jasmin is planning their next location on 15-501 somewhere between Durham and Chapel Hill.

Over in Durham, we got word from a Yelp message board that a sign has gone up in the Erwin Terrace development (think Nosh and Black Twig Cedar House) for a donut shop called Early Bird Donuts. According to their Facebook page, they are a few weeks away from opening.

And if that is not enough sweetness for Durham, got word this week that the folks over at East Durham Pie Company are that much closer to opening a brick and mortar location. It was announced that their new home will be in East Durham at 406 S. Driver Street. They plan to open this summer thanks to a successful Kickstarter campaign.

Also in Durham, we learned this week that the folks over at Alley Twenty Six at 320 E. Chapel Hill Street in Durham have opened a kitchen right next door to the bar that will be helmed by Carrie Schleiffer (think Bar Virgile and G2B).

Unless you were under a rock this week, it was announced last weekend that Cary’s An Cuisine closed after a 10-year run.

We learned that Yogurt Mountain on Creedmoor Road in Raleigh has closed.

On Feb. 8, Piedmont’s executive Chef John May welcomes chef Justin Burdett, whose Local Provisions restaurant in Asheville was named by EATER among the “21 Best New Restaurants in America,” to collaborate on a seven-course winter menu featuring North Carolina seafood and a wide range of preservation methods. The Seasons of the Sea dinner will include dishes featuring pickling, smoking, curing and more alongside sustainably caught North Carolina seafood from Locals Seafood. Reservations can be made by contacting 919-683-1213. All special menus can be previewed in the events section on Piedmont’s website.

The Lucy Daniels Center is proud to announce the inaugural Cooking for a Classic series. This unique philanthropic event held at 1705 Prime (1705 E. Millbrook Road) in Raleigh throughout February and March will feature the talents of 16 local and regional chefs competing head-to-head to win a beautifully restored 1969 Corvette Stingray. The competition is structured tournament style, with two chefs paired together each night and the winner advancing to the next round until a champion is crowned.

DPAC is partnering again with Tyler’s Restaurant & Taproom and Sam’s Quik Shop to host the fifth annual Bull City Food and Beer Experience on March 12. The event showcases breweries and local food vendors with unlimited samplings and three floors of food and beverage options, so make sure you visit each level of DPAC’s lobbies for the full experience.

April 20-23 are the dates for TASTE, a huge culinary event that includes a series of culinary experiences. Now in its fourth year, TASTE invites and assembles more than 50 of the best chefs, culinary artisans, artists, brewmasters, sommeliers and mixologists in the local area. Enjoy “Grand Taste” signature experiences where you can sample the area’s best chefs, spirits and craft beers, as well as special dinners and classes.

On April 30 from 5 to 10 p.m., the Taste for A Cure Gala will take place at the Rickhouse in Durham, where guests can sit back and watch the excitement while local, renowned chefs prepare a five-course farm-to-table feast showcasing local ingredients and inventive plate presentation. The evening will begin with a cocktail hour at 5 p.m., where chefs will prepare the first course right before your eyes. Individual tickets are $225.

And got word from Lisa Jeffries that the Raleigh Food & Wine Festival has set their dates for this year as May 18-21, 2017. Go ahead and mark your calendar.

Valentine’s Day is just around the corner, a day that focuses around nice meals, flowers and candy. For our food-insecure neighbors in need, however, it’s just another day of making tough choices between paying rent or filling empty bellies. Do you have a Heart for Hunger this Valentine’s Day? Donate to the Food Bank of Central and Eastern North Carolina now!