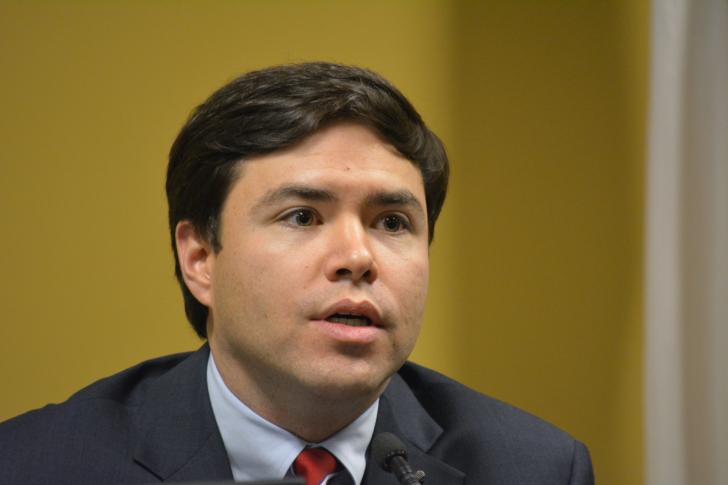 Raleigh, N.C. — North Carolina Superintendent Mark Johnson met with teachers and business leaders Friday in Winston-Salem on the first stop of his statewide listening tour. He said those talks will help him determine what changes are needed in the state’s “outdated” public school system.

Johnson’s meetings with teachers at Glenn High School and with business leaders at the Wake Forest Innovation Quarter were not open to the public. However, he met with the media to give an update on what he was hearing and what plans he has for the future.

Here are 10 things we learned at the superintendent’s first listening tour stop:

Johnson said teacher pay “is definitely a priority” and that he has discussed the topic with teachers. He responded to Friday’s news that this year’s average teacher pay fell just short of the $50,000 mark touted by state lawmakers and former Gov. Pat McCrory last fall.

“I hope that no one makes too much of a political issue of this, just missing it by about $150,” Johnson said. “I would hate for that to be a political talking point. We’re moving in the right direction, but teachers want to be in the classroom teaching. They need to be paid what the free market is demanding, and the General Assembly has promised to get it to $55,000, and I will help the General Assembly do that.”

2) He should have more power because he was elected

Johnson and the State Board of Education disagree over who should have more power over public schools in North Carolina, which is the subject on an ongoing lawsuit.

“I was the one who was on the statewide ballot. People went and voted for the office of the state superintendent,” Johnson said. “I campaigned across this entire state. I heard from my constituents about testing, about lack of authentic workforce development, about teachers feeling they are in a system that is not supporting them the way they need to be supported. I am out there in the community, and I am ready to bring the changes we need to make public schools better in North Carolina.”

3) He supports DeVos for education secretary

Betsy DeVos, President Donald Trump’s nominee for education secretary, is a proponent of school choice. Democrats and teacher organizations have accused her of “seeking to dismantle public education and divert funds to charter schools (and) taxpayer-funded private school vouchers,” according to the Associated Press.

Johnson said he supports her because “she puts students over a system that has been doing the same thing for 100 years.”

5) He will release his own legislative agenda

Johnson said he plans to release his own legislative agenda this summer, separate from the State Board of Education’s agenda.

6) He wants students to be prepared for success, not just college

Business leaders Johnson has spoken with say they want schools to “get in front of students at a younger age and educate them on what potential career opportunities could be,” he said.

“There really needs to be a rethinking of what it means to have vocational education. It is not something where students are told, ‘You’re not college material. You’re not fit to go to college.’ It’s something where every student who wants to can go to college, but you need to know your options,” Johnson said. “If you want to get out of a high school and be a lineman for a power company, in a few years, you could be making over $100,000. If you want to get out of high school and go right to a steel fabrication company as a welder right out of high school, you might be able to be making $70,000.”

7) Technology is important, but not ‘the single-bullet answer’

Johnson said he chose Winston-Salem as the first stop on his listening tour because of the city’s innovation and creative uses of technology, especially at the Innovation Quarter. The site is known as “a place for research, business and education in biomedical science, information technology, digital media, clinical services and advanced materials.”

“Theres a lot of excitement about technology, but as I’ve been saying, technology is just a tool for a teachers,” Johnson said. “Technology will not be the single-bullet answer to our issues.”

Johnson showed a video about IBM’s Teacher Advisor with Watson and said he would like teachers to try the free tool and let him know what they think.

Watson allows teachers to “type in a particular topic or question and get personalized, non-judgmental assistance and recommendations” for lesson planning and teaching strategies, according to IBM.

“Watson, being such a sophisticated device, the more teachers use it, the better it becomes at suggesting the best effective results for teachers,” Johnson said. “I’m not going to say that this is the magic bullet. I’m encouraging teachers to go try this, use it, it’s free, sign up. And then let me know what you think about it.”​

Johnson said his office is launching a new Facebook page this weekend – NC Superintendent Mark Johnson – “where teachers can go and communicate directly with my office on what works, what doesn’t.”

“One of the things I’d love feedback on is how have you interacted with the teacher advisor with Watson and what do you think about it? Is it the type of solution that we need to help teachers in our schools?” Johnson said.