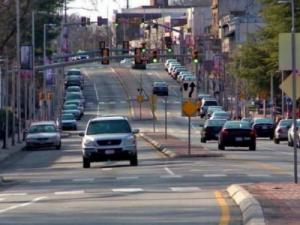 Raleigh, N.C. — The western end of Hillsborough Street near North Carolina State University is a little tricky for drivers these days.

Last summer, crews started a project to mirror the end of the street close to the school’s well-known Bell Tower, adding roundabouts, bike lanes and a raised median.

Now, as crews have shifted their attention to doing similar work on the other end, the construction mess is taking a bite out of some businesses.

Irv Coats, the owner of Reader’s Corner, says he’s trying to keep a sense of humor about the construction.

“We have excavations all over the place. If we have an avalanche or an earthquake, they’re going to dig us out right way,” he quipped.

Reader’s Corner has been open in the 3200 block of Hillsborough Street since 1975.

Coats said customers aren’t showing up “because they can’t get in the parking lot.”

Jeff Murison, executive director of the Hillsborough Street Community Service Corporation, a nonprofit representing merchants on the street, said the construction is tough for drivers and businesses.

“It disrupts their normal activity, but the city has worked hard with the contractor to make it as smooth as possible,” Murison said.

Some business owners say it hasn’t hurt them.

But down the block at Reader’s Corner, Coats said 2017 could be a rough year.

Even after construction finishes, Coats says, he’s going to lose about half of his parking spots to the new roundabout intersection. Despite it all, Coats says the improvements are worth the hassle.

“When it’s all over, my property will probably be worth more,” he said, adding that he hopes customers will come back.

Crews are hoping to finish construction later this year.

Over the next few weeks, they’ll move from the south side of the street to the north side.