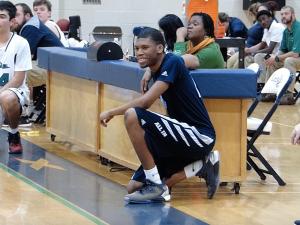 The two varsity teams meet on Tuesday night at Millbrook, but the junior varsity team played on Monday night at Leesville Road. It was in that game where two rivals had a tremendous moment of sportsmanship.

Jayvin Talley is a student with special needs at Millbrook. He has spent a lot of time around the Millbrook basketball program.

“He’s one of my students (at Millbrook),” said Millbrook junior varsity basketball coach Chris Davis, who is also an Occupational Course of Study teacher at the school. “He couldn’t tryout for the team, but I told him I wanted him to stay in it, so I made him a manager.”

With just two games left this season, Talley was given the opportunity to dress out on Monday night.

He wasn’t just on the bench though. Martez Martin, an injured Millbrook player, gave Talley his team shoes so he would match the rest of the team. He wore the jersey of another injured Wildcat, Adam Carey.

“He really felt like one of the guys,” said Davis

With a few minutes left in the game, Davis put Talley in. Millbrook wanted to give him a chance to score. His first opportunity came and he missed. The next opportunity was on a fast break and the ball went out of bounds.

Leesville Road, who was trailing at the time, had the ball underneath the Millbrook basket. During the timeout, Benjamin told his team to turn the ball over and give Talley another chance to score. They turned it over, and this time Talley scored.

“I was excited. I was happy for him. We’re on these kids all the time about doing the right things,” Benjamin said. “Even though we were down, that kid scored and it just felt good to see someone so excited. I was super excited for him.”

“Everybody cheered,” Davis said. “Ishua Benjamin was a prince. That was such an honorable, unexpected thing for him to do, and for the kid I really appreciate it.”

Talley got another chance to score before the game ended, but couldn’t get the shot to fall.

“I was hoping he scored again,” Benjamin, who played college basketball at North Carolina State University, said. “”To give that kid an opportunity to score and feel good about himself, we talk about giving back all the time. Even though we lost, the feeling of the kids in the locker room was great. That’s the stuff you don’t see on TV or anywhere else.”

Keeping with tradition of treating his managers like players, Davis said there will be consequences for the missed lay-ups.

“I told him he had to do some running tomorrow for all those missed lay-ups,” Davis said.