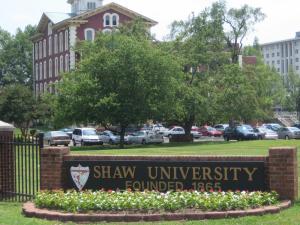 Raleigh Mayor Nancy McFarlane told the group of Shaw students Tuesday night there will not be a Raleigh Police Department substation on their campus, and students responded by saying they want the decision in writing.

The idea of a Raleigh police substation on the Shaw campus had some students on edge.

“We are here to make that clear that we don’t believe that a substation will improve the relations with police and students or campus safety,” Shaw student Essence Shelton said.

Friction began largely because on content in a letter from Shaw University President Tashni-Ann Dubroy. In the letter, written in September to McFarlane, Dubroy said she would like to discuss joint community safety efforts with the mayor.

“Our student government association reached out to me about student concerns about campus and community safety and, in tandem, we were talking with the Raleigh Police Department about increasing positive engagement,” Dubroy said.

The letter goes on to mention the idea of establishing a Raleigh police substation on campus. McFarlane has said there will be no substation at Shaw, but Dubroy said it was just one component included in a larger vision for campus safety.

“The exploratory letter to the mayor highlights a much larger vision than a substation. It’s really about engaging the Raleigh PD and showing that they know who our students are,” she said.

Students said they opposed the idea of a substation because they fear they won’t be policed fairly and that their status as a historically black college would cause police to profile them.

“Having the idea of community policing, just having police officers there does not make you feel safe. It just means that now you’re being watched,” Shaw student Hakeem Dykes said.

It is unclear how Shaw University and the city will move forward with joint safety efforts.