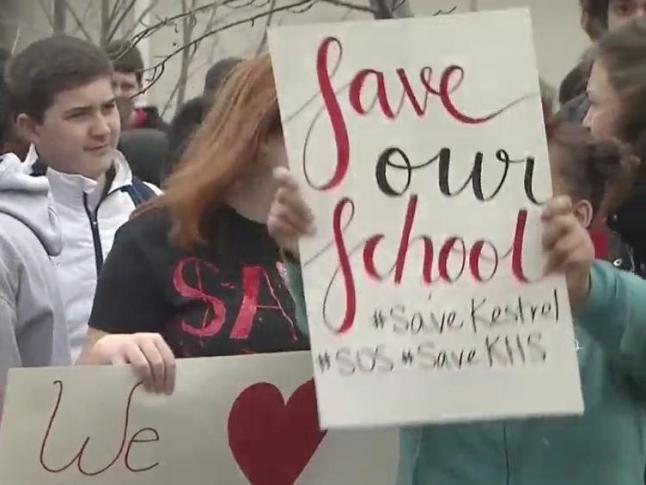 Raleigh, N.C. — One by one, emails streamed in to the State Board of Education last month. Teachers, parents and students at Kestrel Heights charter school in Durham pleaded with board members to save their school.

“Shutting down the school is too harsh.”

“I can’t afford to lose all my closest friends.”

“Please do not punish the current students.”

“Where are all these students going to go?”

The amount of feedback was so significant that state board members decided to delay their vote on the fate of Kestrel Heights High School until March.

Board members wanted more time to read the many emails they had received about why the school should remain open despite the fact that 40 percent of the schools’ students received diplomas they didn’t earn in the past eight years.

WRAL News requested copies of the feedback the state board has received. The North Carolina Department of Public Instruction released the emails this week, with some portions redacted to protect student privacy.

Among the many emails from Kestrel Heights supporters was one from a member of the state Charter Schools Advisory Board, who decided to make his own appeal to the State Board of Education.

“Please do not cave to this parent & employee pressure,” advisory board member Alan Hawkes wrote on Jan. 26. “Parents and personnel should be grateful (the advisory board’s) recommendation was not more severe than it was.”

Hawkes and the rest of the Charter Schools Advisory Board voted unanimously last month to recommend closing Kestrel Heights High School, effective July 1, as punishment for the diploma debacle. They agreed that the school should still be allowed to serve students in grades K-8. Some members, including Hawkes, said the vote was one of the toughest they had ever made.

In an interview Tuesday, Hawkes called the vote to recommend closing the high school “agonizing” but said it had to be done to show that the state is holding charter schools accountable.

“We heard from parents and teachers at Kestrel Heights, and they’re wailing and gnashing their teeth,” Hawkes said. “And I’m sympathetic, but you still have to, with something that egregious, there have to be sanctions.”

Despite the advisory board’s recommendation, the final decision on the school’s fate rests with the State Board of Education, which is expected to discuss the matter at its next meeting on March 1 and vote on March 2.

Kestrel Heights supporters have ramped up their efforts in recent weeks to persuade the State Board of Education to keep their school open. They’ve not only sent emails, they also started a Change.org petition, which had garnered nearly 600 signatures as of Wednesday.

Kestrel Heights Board of Directors has made its own push as well, requesting to meet with state board members and reportedly working on an “alternate plan” to keep the high school open. As of Wednesday, no meeting had occurred and no plans had been submitted, according to state and school officials.

Kestrel Heights Executive Director Mark Tracy said Wednesday that the school’s board “is in the process of developing some additional communication to the state board at this time.” He declined to elaborate, saying that they prefer to “communicate directly with the state board before commenting outside of that process.”

“We have made substantial changes, organizationally, be it processes and procedures, to make sure this will never happen again,” Tracy said. “It would be a shame and a disruption to our current students who had nothing to really do with this if they didn’t have an opportunity to continue their education here at Kestrel and graduate.”

That was a common theme among those who emailed the state board. The school should not be closed, they argued, because they self-reported the problem.

Kestrel Heights alerted the state Office of Charter Schools last fall that it had given diplomas to students who didn’t earn them. The school’s new principal first discovered the problem last summer. School leaders investigated further and found that 160 of 399 students received diplomas in the past eight years without earning all of the proper credits.

The problems stemmed from “systematic errors” by a counselor and two principals, according to school officials, who said the staffers are no longer employed. Meanwhile, the Durham County District Attorney’s Office is working to determine whether a criminal investigation is warranted.

Kimberly Mohn, an art teacher at the school, wrote to state board members last month to say that many students have spoken to her about “the injustice they feel” over the school’s possible closure, especially given the school’s decision to report the problem.

“They have asked, ‘Why would I ever be ethical (and report a wrongdoing) if that’s the cost?'” she wrote. “I’m hoping that the North Carolina Department of Instruction will give them the correct answer to that question.”

Hawkes, who serves on the state’s charter advisory board, doesn’t see it that way.

“It was kind of self-serving,” he said. “The (school’s) new team came on board. They knew it was going to get picked up by DPI or the Office of Charter Schools sooner or later anyway, so it was in their best interest to fess up, get this behind them and hope to mitigate the consequences.”

Hawkes said he believes the State Board of Education will follow the advisory board’s recommendation and close the high school.

For now, Kestrel Heights supporters say they will remain hopeful and continue to advocate for their school.